Update Required To play the media you will need to either update your browser to a recent version or update your Flash plugin.
By George Grow
28 April, 2015


National Guard troops are guarding the eastern U.S. city of Baltimore, Maryland. The troop deployment is part of an effort to re-establish order a day after rioting caused widespread destruction there. The violence started after the funeral of Freddie Gray, a 25-year-old black man. He died from injuries suffered while police detained him.

Maryland Governor Larry Hogan declared a state of emergency in Baltimore. The city's public schools were closed Tuesday. Baltimore Mayor Stephanie Rawlings-Blake has declared a week-long night-time curfew. She called the riots, "one of the darkest days the city has ever faced."

The violence began as hundreds of high school students protested Freddie Gray's death after classes had been dismissed for the day. The protesters then spread across several neighborhoods. The city's police department did not have enough officers available as the demonstrations turned violent. 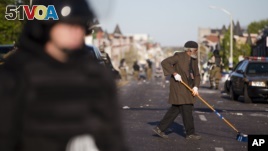 Protesters attacked and burned businesses and vehicles. Some threw stones, bottles and other objects at police. Police Commissioner Anthony Batts said 15 officers were injured in the clashes. More than 200 people were arrested.

"I understand anger," said Mayor Rawlings-Blake. "What we see isn't anger – it's the destruction of a community." She called the protesters, "thugs."

Rioters set fire to buildings, including one set to become a center for older adults. A Christian group was planning to operate the center. Donte Hickman heads Baltimore's Southern Baptist Church.

Monday night, the family of Freddie Gray called for the rioting to stop. His mother, Gloria Darden, spoke to reporters.

"I want you all to get justice for my son, but don't do it like this here. Don't tear up the whole city, man. Just for him? It's wrong."

Freddie Gray suffered severe spinal cord injuries after he was arrested on April 12. Officials say he was not restrained correctly while being transported in a police vehicle. Police Commissioner Batts said officers were slow to recognize that he needed medical attention. He reportedly had a breathing disorder, asthma.

Six officers who had contact with Freddie Gray have been placed on administrative leave.

His death has become the latest incident to fuel protests about contacts between police and minorities in the United States.

Hours before the violence began. Loretta Lynch was sworn-in as U.S. Attorney General. She met with President Barack Obama at the White House to discuss the federal government's answer to the unrest. She later released a statement condemning what she called "the senseless acts of violence by some individuals in Baltimore."

The U.S. Justice Department and Federal Bureau of Investigation have ordered a civil rights investigation into Freddie Gray's death. The Baltimore Police Department says it expects more information about the case on May 1.

This report was based on stories from VOANews.com. George Grow wrote it for Learning English. Mario Ritter was the editor.

reestablish – v. to return to an earlier condition or place

rioting – n. a violent action by a large group of people; v. to act with many others in a violent way in a public place

curfew –n. an order to people to stay off the streets or to close their businesses

attention – n. close or careful observing of, or listening to, someone or something

contact – v. to meet or communicate with; n. the acting of touching or being close to a person or thing