Update Required To play the media you will need to either update your browser to a recent version or update your Flash plugin.
By Jonathan Evans
01 January, 2019


Visitors to the U.S. National Museum of the American Indian recently had a chance to buy artwork made by some of the world's finest Native American artists.

The handmade objects included jewelry and clothing, as well as paintings and statues. They were offered to the public as part of a two-day Native Art Market at the museum's headquarters, in Washington, D.C.

One artist at the event was Porfirio Gutierrez. His ancestors belonged to the Zapotecs, an ancient group of people that lived in what is now southern Mexico.

Gutierrez says he and his family create handwoven cloth by using the same methods as their ancestors. He describes the resulting textiles as "functional art," influenced by the natural world.

"These ways of making colors and making an authentic piece, it's disappearing. So I feel like I need to contribute into the preservation, and the only way to preserve it is to actually employ these old ways of making the arts."

Gutierrez's work was among the hundreds of objects on sale at the Native American art event. They represent traditional and modern works by more than 30 Native artists from across North America.

Like Gutierrez, many of the artists said that nature is a big influence on their artwork.

For example, Jhane Myers uses teeth and bones from animals for some of her jewelry.

"Each elk has two ivory teeth, so I do these necklaces, and then I also have buffalo bone beads. I try to use all the same items that we used as a traditional Native people 200 years ago." 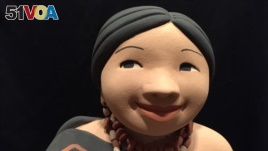 A closer look at one of Kathleen Wall's ceramic dolls. (J.Taboh/VOA)

Artist Kathleen Wall uses clay from the ground around Jemez Pueblo in New Mexico to make dolls. She paints one doll at a time, giving each one a peaceful facial expression.

The National Museum of the American Indian has been holding the art market each year since 2006.

Hayes Lavis is head of cultural arts at the museum. He says he hopes visitors leave with a better understanding of Native people in the Americas.

"What we're hoping that people will take away from this experience is just a realization of the contributions of Native people to the Americas. They were here first, they've always been here, they've gone through a lot of adversity and they are still thriving, strong, creative cultures."

adversity – n. a difficult situation or condition; misfortune or tragedy

contribute – v. to give something, such as money, goods, or time to help a person, group, cause, or organization

preservation – n. the act of keeping something valuable alive or free from damage; protection

authentic – adj. based on fact; realistic

museum – n. a center set up for the care, study and demonstration of objects of lasting value