Update Required To play the media you will need to either update your browser to a recent version or update your Flash plugin.
By Bryan Lynn
07 July 2021


The U.S. Navy is halting development of a high-tech weapon designed to fire projectiles at up to seven times the speed of sound.

The Navy spent more than 10 years developing the weapon, called an electromagnetic railgun. The cannon-like railgun uses electricity instead of chemical substances to fire projectiles.

A report released earlier this year by the Congressional Research Service stated that the Navy had been developing the railgun as a firing weapon to support U.S. Marines operations. The report said the development also centered on possible use of the railgun as a missile defense system.

The move to cancel railgun development comes as the U.S. Department of Defense turns its attention to the development of hypersonic missiles, The Associated Press reports.

Hypersonic is a term that relates to speeds of more than five times the speed of sound, also known as Mach 5. In addition to flying at extremely high speeds, hypersonic weapons are designed to move in ways that make them difficult to find and destroy in flight. 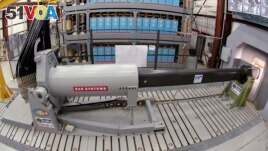 The U.S. military has been putting money into the development of hypersonic weapons in recent years in an effort to keep up with hypersonic military programs in China and Russia.

Matthew Caris is a defense expert with the private advisory company Avascent Group. He told the AP that "the railgun is, for the moment, dead."

The halt in railgun development, Caris said, suggests that the Navy saw difficulties in implementing the technology. In addition, the Navy likely recognized that hypersonic missiles have higher performing abilities than the railgun, he added.

Lieutenant Courtney Callaghan is a Navy spokesperson. She told the AP that the Navy's decision will free up resources for hypersonic missiles, as well as lasers and other electronic warfare systems.

The Navy spent about $500 million on research and development of the railgun, said Bryan Clark, a defense expert at the Hudson Institute.

The railgun held the possibility of providing an effective weapon at a much lower cost than smart bombs and missiles. Using electricity, a railgun can fire a projectile at six or seven times the speed of sound, creating enough energy to destroy targets.

But Clark said the program experienced a number of problems, including the limited range of the railgun in testing. In addition, its usefulness for missile defense was also limited by range and rate of fire, Clark added.

Another big question was whether the gun could stay together during continuous firing, said defense analyst Norman Friedman.

A normal gun can be fired about 600 times before the barrel has to be refurbished. But the barrel on tested railguns, Clark said, had to be replaced after about 12 to 24 shots were fired.

A few years ago, the Navy was talking about putting the gun on the future USS Lyndon B. Johnson, the last of three stealthy destroyers. But now, the Navy is developing what it calls a "hypervelocity projectile," which is designed to be fired from existing gun systems.

projectile – n. an object that is thrown or shot forward with force

cannon – n. a large, powerful gun, usually attached to two or four wheels, that was used in the past to fire heavy balls

implement – v. to start using a plan or system

barrel – n. the long part of a gun that is shaped like a tube

refurbish – v. to improve or restore something to working order

stealthy – adj. quiet and careful in order not to be seen or heard