Update Required To play the media you will need to either update your browser to a recent version or update your Flash plugin.
By VOA
04 July, 2014

The U.S. Navy now has a woman as its second-highest ranking officer for the first time in its 236-year history. Michelle Howard was promoted Tuesday to the level of four-star admiral. Michelle Howard received her fourth star at a ceremony at Arlington National Cemetery with her family and other service members looking on.

"If you don't believe today was the first - when I called to order, a four-star shoulder board for women - they didn't exist. [A] special contract was let and you folks are seeing the first set in the history of the United States Navy.

Admiral Michelle Howard is beginning her new duties as vice chief of naval operations. Secretary of the Navy Ray Mabus was the one who promoted Ms. Howard.

"The Navy picked the best officer to be the VCNO (vice chief of naval operations). That's the only thing that happened here today."

The promotion of Ms. Howard to four-star admiral is historic. It is a promising sign for military women hoping to move up in a career traditionally dominated, or controlled, by men.

But making history is something Admiral Howard has done all during her military career.

Chief of Naval Operations Jonathan Greenert says the honor of being the Navy's first 4-star woman admiral means something else for Ms. Howard. He says that she is ready to set an example for many young women, or as he puts it "bear the burden of a role model."

"She will bear the burden of a role model, and she is ready to bear that very well, and I am very excited about that because we need lots more women in the Navy." 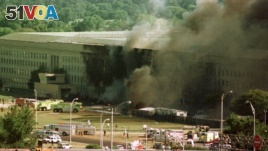 A helicopter flies over the Pentagon on Sept. 11, 2001. The Pentagon took a direct hit from an aircraft.

In her career, Ms. Howard has been a part of several important events in U.S. history. She was in the Pentagon, the Defense Department headquarters, on September 11, 2001 when terrorists crashed a plane into that building.

And in 2009, Ms. Howard was part of the naval force sent to rescue the merchant ship Maersk Alabama and its captain Richard Phillips. Somali pirates had kidnapped Captain Phillips from the ship, which carries the American flag. She says she was very new to her job when the incident took place.

"I was just three days in the job when we got word that Captain Phillips had been kidnapped."

American women serving in the military have broken many barriers in recent years. They can compete these days for positions that once were closed to them. Ms. Howard says her promotion can encourage, or help, other women gain their career goals in the military.

Admiral Michelle Howard is the first four-star Admiral in the U.S. Navy.

Admiral Howard is the third woman in the U.S. military to gain four-star rank. One is in the Army and the other in the Air Force.

Officials from all military services have announced plans to open combat positions to women who meet physical or performance requirements by 2016.