Update Required To play the media you will need to either update your browser to a recent version or update your Flash plugin.
By VOA
20 October, 2016

Trump, a businessman, is the candidate of the Republican Party. The Democratic Party nominated former Secretary of State Hillary Clinton as its candidate.

Wednesday night, Trump and Clinton met for their final debate before the November 8th election. Trump was asked if he would accept the results of the vote -- win or lose.

On Thursday, Trump appeared to joke about if he would accept the election result.

He said, "I would like to promise and pledge to all of my voters and supporters and to all of the people of the United States that I will totally accept the results of this great and historic presidential election." He then paused and said, "If I win."

Trump went on to say he has the right to challenge the results "in the case of a questionable result." 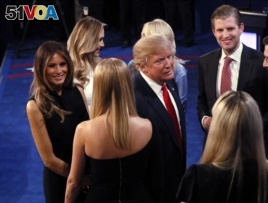 Donald Trump talks to his family after debate.

At the debate, Clinton described his comments as "horrifying." Some of her supporters said Trump is, in effect, telling his supporters to believe that if he does not win the presidency it will be because of an unfair voting system.

"So that is not the way our democracy works," Clinton said. "We've been around for 240 years. We've had free and fair elections. We've accepted the outcomes when we may not have liked them."

Over the years, the United States has had a number of presidential elections in which the results were disputed. But historians and election experts say it is unusual for a candidate to raise concerns about fraud before people vote.

"Our institutions like our election system is one of the bedrocks of American democracy," said John Husted, a Republican who serves as Ohio's Secretary of State. "We should not question it or the legitimacy of it. It works very well."

A new report says voting fraud is unusual and "does not happen on a scale even close to that necessary to ‘rig' an election." The report comes from the Brennan Center for Justice at the New York University School of Law.

One reason massive fraud is unlikely is because there is no single government office that controls presidential elections.

National elections in the United States are the product of work by 50 state governments. And the Republicans now control 67 of 98 state legislatures -- more than any other time in American history.

The last presidential election that raised concerns about the final results was in 2000. That was when voters had to choose between Republican George W. Bush and Democrat Al Gore.

Gore won the popular vote by over 500,000 votes. But the winner is not decided by who gets the most votes.

The winner is decided by the 538 members of the Electoral College. They are chosen based on which presidential candidate wins the most votes in each state.

2000 Election Was Down to Florida

With the vote in Florida too close to call the morning after the election, Gore was leading in the Electoral College vote, 266-246. A majority, or 270 electoral votes, is needed to win the presidency.

After 36 days of recounting ballots, the U.S. Supreme Court ordered the recount to stop. Bush was declared the winner in Florida by 537 votes out of nearly 6 million ballots.

He became president by winning the Electoral College vote, 271 to 266.

In 1960, another Democrat, John Kennedy, won a close election against Republican Richard Nixon. There were charges that votes by dead people were counted to help Kennedy win Illinois.

Richard Reeves reported on the 1960 election. He wrote that Nixon decided not to fight the election results.

"He (Nixon) had many faults, but he thought politics had something to do with loving country over self," Reeves wrote. He said Nixon knew a recount would take "months, even years," and would hurt America.

In 1824, Andrew Jackson won the popular vote, but the House of Representatives decided the election. That is because none of the candidates -- Jackson, John Quincy Adams, William Crawford and Henry Clay -- won a majority of the Electoral College.

After a month of closed-door talks, the House voted to make Adams the president. After he took office, Adams named Clay, who led the House of Representatives, as his secretary of state.

Jackson was angry. He said the election was decided in a "corrupt bargain."

He said an important way of making sure that Americans accept the election results is what is called a "concession speech." It is a speech in which the losing candidate accepts defeat and congratulates the winning candidate.

Kastor said the 2016 election is unusual. Both Trump and Democrat Bernie Sanders, who fought Clinton for the Democratic nomination, told voters that the system is rigged to help big companies and business people with ties to political leaders.

Those arguments about a "rigged" economy could well make their supporters more likely to question if the election itself is rigged, Kastor said. Some Sanders supporters said the candidate was not treated fairly during the Democratic presidential nominating process.

But Sanders is now supporting Clinton for president.

Heather Cox Richardson is a history professor at Boston College in Massachusetts. She likens some of the Americans who support Trump to voters in the late 1800s who thought African-Americans and immigrants were taking their jobs.

In 1898, a group of poor black and white voters in North Carolina had elected candidates to office, Cox Richardson said. Protestors killed 10 black neighbors and forced the candidates elected by the poor voters to resign.

The protestors argued the political process was rigged against them, Cox Richardson said.

President Barack Obama will leave office on January 20, when the winner of the 2016 election takes his place.

Obama said one of the great things about American democracy is that the losing candidate congratulates the winner -- even after a difficult campaign. This helps the country "move forward," he said.

"I have never seen in my lifetime or in modern political history, any presidential candidate trying to discredit the elections and the election process before votes have even taken place," Obama said.

We want to hear from you. Write to us in the Comments Section and share your views on 51VOA.COM. Are you paying attention to the U.S. presidential race? What are your opinions?

rigged - v. to control or affect an election or game in a dishonest way in order to get a desired result

fraud - n. the crime of using dishonest methods to get the results you want

pile-on – v. to join others in criticizing someone or something

horrifying – v. causing someone to feel shocked or frightened

legitimacy - n. done according to rules

scale - n. the size or level of something