Update Required To play the media you will need to either update your browser to a recent version or update your Flash plugin.
By VOA
24 June, 2014

The 2014 Trafficking in Persons Report placed Thailand in a group known as Tier Three. That is the lowest rating among 23 countries that U.S. officials say are not doing enough to stop modern slavery.

The report tells about the tens of thousands of migrants to Thailand. Many of these people are forced to work in Thailand's fishing industry or the sex trade. The Tier Three listing opens up Thailand and others to possible American sanctions.

The State Department studied 188 countries, including the United States. The report is aimed at forcing governments to take steps to help the estimated 20 million victims of modern slavery. 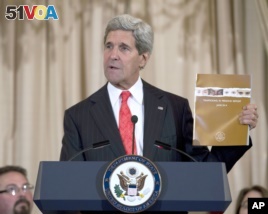 "It is a call to action to governments and citizens around the world to uncover modern slavery and hold it accountable, to identify the victims, to bring their abusers to justice. There cannot be impunity for those who traffic human beings. It must end."

U.S. officials noted some hopeful news in the report this year. The State Department named 10 heroes in the effort to stop trafficking. They include Beatrice Jedy-Agba of Nigeria. She is the head of Nigeria's National Agency for the Prohibition of Trafficking. Officials praised her efforts to help trafficking victims rejoin Nigerian society. They also praised her work with other nations to deal with trafficking in Africa.

Secretary of State Kerry said he hopes more people and governments will answer his "call to action" – to fight what he calls the scourge of modern slavery. I'm Caty Weaver.
Related Articles
go top