US Open 2020: A Tennis Championship Unlike Any Other

Update Required To play the media you will need to either update your browser to a recent version or update your Flash plugin.
By Susan Shand
28 August 2020

Ask American tennis great Serena Williams. She spoke with reporters about playing during a pandemic. "In the beginning, I was like: There is no way these tournaments can even happen," she said.

Professional tennis returned recently after a break of nearly six months because of the coronavirus health crisis. The sport will return to one of its biggest stages Monday, when Flushing Meadows in New York begins holding the first Grand Slam events since the Australian Open ended in February. 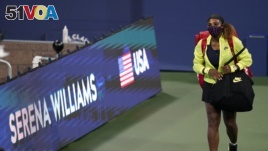 In this Aug. 25, 2020, file photo, Serena Williams arrives for her match with Maria Sakkari, of Greece, during the third round at the Western & Southern Open tennis tournament in New York. (AP Photo/Frank Franklin II)

Djokovic caught COVID-19 in June during a series of tennis matches he organized in Serbia and Croatia.

The United States Tennis Association set up what it calls a "controlled environment" for the 2020 US Open. Nearly all players and people traveling with them are staying in two hotels on New York's Long Island. They are not permitted to enter Manhattan.

The players are tested often for the coronavirus. One player said she was tested just after sunrise, four hours before she was to play at the Western & Southern Open. Usually played in Ohio, the Western and Southern Open is now being played on the same grounds as the US Open.

There are more than 20 "social distancing ambassadors" who keep their eyes on the players at all times to make sure they are covering their mouths and noses and staying far apart.

Serena Williams noted that the rules are very strong, but added, "it definitely helps me to feel safe."

The US Open traditionally ends the Grand Slam season. This year the event is going second because the French Open was postponed from May until late September, and Wimbledon was canceled for the first time since World War II.

"It's been so long," said American player Taylor Fritz, speaking of the nearly six-month delay. He added that everyone is pleased "to be back out there."

Well, not quite everyone will be back out there.

No one will be watching from the seats. Last year, more than 700,000 people attended the US Open. And several top players, including both 2019 winners -- Rafael Nadal and Bianca Andreescu -- will not be there.

Roger Federer is not playing. He has had two knee operations. The number-one ranked woman, Ash Barty, chose not to play because of the coronavirus. Six of the top eight women will not play.

The competition is "a little weaker than normal," Fritz said, "so there's always an opportunity for a couple of people to step up."

Williams is hoping to win a 24th Grand Slam singles championship, which would tie the record. The woman who beat her in the final two years ago, Naomi Osaka, is also playing this year.

Djokovic decided to play about a week before flying to New York. He has won five of the past seven Grand Slam finals to get to a total of 17 wins.

"It is definitely strange not to have Federer and Nadal -- at least one of them," Djokovic said. "They will be missed, without a doubt."

pandemic – n. a contagious disease that crosses into several countries

professional – adj. those that are paid for their efforts, not amateur

stage – n. a platform for all to view

opportunity – n. a chance to accomplish something

doubt – n. being uncertain something will succeed