Update Required To play the media you will need to either update your browser to a recent version or update your Flash plugin.
By Hai Do
12 September, 2018

Umpire Carlos Ramos has made his first public statement since his disputed calls at the U.S. Open final Saturday. American Serena Williams and Japan's Naomi Osaka were competing in the championship.

"I am good, under the circumstances," Ramos told Portugal's Tribuna Expresso. He called it "an unhappy situation" and said he followed the rules of tennis.

"Don't you worry about me!" he added.

Ramos told the newspaper that he stayed off the streets of New York after the match to avoid any "complicated situations." He will be back to work as umpire on Friday in Zadar, Croatia.

Ramos called three rules violations against Williams during the event. The decision caused a heated on-court dispute between him and Williams. It later started a larger debate about sexism in tennis.

Ramos was unable to defend himself over the weekend as the rules prevent umpires from commenting on the matches they oversee. 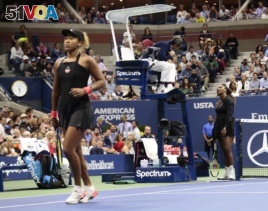 The International Tennis Federation (ITF) is the governing organization for international tennis.

It defended Ramos in a statement on Monday: "Carlos Ramos is one of the most experienced and respected umpires in tennis. Mr. Ramos' decisions were in accordance with the relevant rules...." It added that US Open organizers confirmed Ramos' decisions when they decided to fine Williams for the three offenses.

Billie Jean King is a former world number one player who founded the WTA. She said on Tuesday both sides shared the blame for the incident.

She described Williams' behavior on court as "out of line." She added that Ramos could have prevented the incident with clear communication.

Rory Carroll reported this story for Reuters News Agency. Hai Do adapted it for VOA Learning English. Caty Weaver was the editor.

umpire - n. a person who controls play and makes sure that players act according to the rules in a sports event like tennis

complicated - adj. hard to understand, explain, or deal with

accordance - n. in a way that follows (something such as a rule)

relevant - adj. relating to a subject in an appropriate way