Update Required To play the media you will need to either update your browser to a recent version or update your Flash plugin.
By Dan Novak
07 September 2021


American states that ban face coverings in schools may be discriminating against students with disabilities, U.S. Department of Education officials say.

The Department of Education Office for Civil Rights has opened investigations into five states that ban face coverings, or masks. The states are Iowa, Oklahoma, South Carolina, Tennessee and Utah.

Suzanne Goldberg is the department's assistant secretary for civil rights. She informed the states of the investigation, saying that they could be in violation of the Americans With Disabilities Act, or ADA. The 1990 law bans discrimination against people with disabilities and requires that children with disabilities receive a fair education.

Goldberg said in a letter that the "investigation will focus on whether ... students with disabilities who are at heightened risk for severe illness from COVID-19 are prevented from safely returning to in-person education, in violation of Federal law."

Uneven requirements among the states

The administration of President Joe Biden has said it would fight back against efforts by Republican state lawmakers to prevent mask mandates in schools. Those against the requirements say it is a matter of personal freedom. They argue that it should be up to parents and individuals to decide.

In the state of Tennessee, Republican Governor Bill Lee signed an executive order on August 16 letting parents "opt out" of any requirement that children wear masks in school. Two legal actions have since been filed against the order including one saying that it violates the ADA. 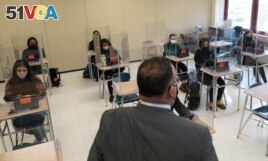 Four other states, Arizona, Arkansas, Florida and Texas, have also passed laws or signed executive orders banning mask mandates in schools. But the states are not currently under investigation because court orders have blocked the bans.

In Florida, a court ruled on August 27 that school systems may go against the governor's order and require students to wear masks. Florida Governor Ron DeSantis has said that wearing masks should be up to parents, and not the government. He has also suggested that wearing masks hurts kids' ability to learn and communicate. The Florida Department of Education said they would appeal the court's ruling.

Sara Lee is a mother of two 10-year-old children attending school in Florida's Leon County. She said her children do not mind wearing masks at all.

A question of health or politics

Dr. Rochelle Walensky is director of the U.S. Centers for Disease Control and Prevention, or CDC. At a briefing on COVID-19 on July 27, she told reporters, "Children should return to full-time in-person learning in the fall with proper prevention strategy in place."

Walensky recommended that all students, teachers, workers and visitors wear a mask in schools. The recommendation is in effect for both unvaccinated and vaccinated people.

A recent CDC study says since the health agency updated its guidelines on mask-wearing, parents have gotten more worried about schools opening up in person. Before July 27, 58 percent of parents asked said they wanted their children attending school in person full time. But after the new guidance, that number fell to 43 percent.

Meanwhile, COVID infections among children have increased by five times over the past month, says the American Academy of Pediatrics. Children under 12 are currently unable to get COVID vaccinations. And children with certain disabilities and health problems are at greater risk of severe coronavirus infection and death.

Vaccine makers Pfizer-BioNTech and Moderna say they are developing a vaccine safe for children aged 5 to 11.

A school system in Texas closed recently until after the Labor Day holiday when two of its teachers died of COVID-19.

Robin Lake is the director of the Center for Reinventing Public Education. The organization has researched schools' reopening plans and coronavirus prevention policies.

"Our school systems should have had strong safety and quarantine plans in place months ago," Lake said on Twitter. "Anyone watching the science should have known fall reopening was going to be very difficult."

Miguel Cardona is the U.S. Secretary of Education. He said in a statement that it is "simply unacceptable that state leaders are putting politics over the health and education of the students they took an oath to serve."

Dan Novak wrote this story for Learning English with additional reporting from the Associated Press. Hai Do was the editor.

disability — n. a condition (such as an illness or an injury) that damages or limits a person's physical or mental abilities

heighten — v. to increase the amount, degree, or extent of (something)

mandate — n. an official order to do something

opt — v. to choose one thing instead of another

quarantine — n. the period of time during which a person or animal that has a disease or that might have a disease is kept away from others to prevent the disease from spreading

oath — n. a formal and serious promise to tell the truth or to do something