Update Required To play the media you will need to either update your browser to a recent version or update your Flash plugin.
By Bruce Alpert
07 July, 2016

The restrictions are expected to have limited impact. The United States has almost no direct business connections to North Korea.

But supporters say the measures send an important message to North Korean leaders. 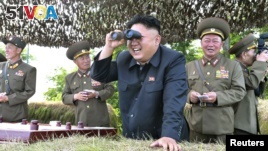 The U.S. Ambassador to the United Nations, Samantha Powers, said the restrictions send a message to many in North Korea, not just its top leaders. She said it will be heard by "prison camp managers and guards, secret police, interrogators and persecutors of defectors."

South Korea said it supports the U.S. decision. The measures include a freeze on U.S. bank accounts belonging to Kim Jong Un and other North Korean officials.

Cho June-hyuck is an official with the South Korean Foreign Ministry. He said the restrictions will raise awareness internationally of the broad and systemic human rights violations in North Korea.

Among the agencies targeted is the Ministry of People's Security, which operates police stations and detention centers, including labor camps.

Phil Robertson is deputy director of the Asia division of Human Rights Watch. He said the restrictions show that the international community is increasingly concerned about the North Korean government abuses.

North Korea reacted to the UN move with a declaration that it would continue its nuclear development program. It also test fired short and medium distance missiles.

interrogator – n. a person who questions people in a thorough and often forceful or violent way

persecutor – n. a person who treats (someone) cruelly or unfairly especially because of race or religious or political beliefs

defector – n. someone who tries to leave a country or movement