US Parents Look to Have More Influence over School Curriculums

Update Required To play the media you will need to either update your browser to a recent version or update your Flash plugin.
By Dan Novak
01 March 2022


A big debate in American schools is over how much control parents should have in their child's education.

Parents around the nation have been protesting how certain topics, such as race, history and religion, are taught in schools. Some have gone to school board meetings and demand their politicians take steps to control what is taught in the classroom.

A school board is a group of elected officials who control educational policy and finances. 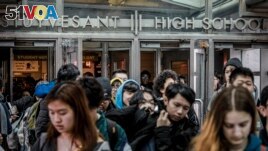 At least 12 Republican-led states have recently introduced bills that require school districts to post their teaching materials online. Some of the bills permit parents to bring legal action against schools that do not follow the rules. These are called "transparency bills."

And in the United States Congress, Republicans have introduced a "Parents Bill of Rights." Included in the proposal is a list of rights parents should have when it comes to their child's schooling.

Republicans that support the proposal said in a statement that Democrats "want to take power away from parents and hand over more control to politicians and teachers unions to dictate what our children should be taught in classrooms." The bill of rights has gained popularity among conservatives in response to things like critical race theory and mask and vaccine mandates in schools.

Critical race theory is based on the idea that systemic racism has deeply shaped American society, laws and policies.

The bill was first introduced in November and is unlikely to pass the Democratic-controlled Congress. But it may have caused some Republican states to introduce similar measures.

Georgia's state Senate last week approved a measure that protects parental rights in public education. The measure says parents have the right to examine all classroom materials, the right to see all records relating to their child, the right to remove their child from sex education, and the right to prevent the creation of photos, videos and voice recordings of their children except for security purposes. Many of the rights already exist.

A December survey by EducationWeek found that most teachers say parents should have a say in the curriculum, or the subjects and materials that are being taught. But just 33 percent of teachers surveyed said parents were involved in selecting curriculum and materials in their district.

In Virginia, Republican Glenn Youngkin made parents' rights a big part of his campaign for governor, an election he won. He has said that parents should be in charge of their kids' education.

But teachers and educators say transparency bills are unnecessary because information on curriculum and spending is already publicly available. Opponents of the bills say it would make teachers' jobs even more difficult.

In a Washington Post column, authors Jack Schneider and Jennifer Berkshire argued that parents have no legal right to determine their child's curriculum. United States law supports "the idea that education should prepare young people to think for themselves, even if that runs counter to the wishes of parents," they said.

Robert Estice is a middle school science and critical thinking teacher in Ohio, one of the states that introduced a transparency bill. He said the bill is a way to control what is taught in the classroom.

He told The Associated Press the bill is a way "to get into the classroom to pick through what they see and point us in different directions or stop us from doing things."

Dan Novak wrote this story for VOA Learning English with additional reporting from The Associated Press.

mandate — n. an official order to do something

transparency — n. the quality that makes something obvious or easy to understand

dictate — v. to say or state with authority or power

counter — adv. in a way that goes against or does not agree with something