Update Required To play the media you will need to either update your browser to a recent version or update your Flash plugin.
By Dan Novak
05 March 2022


The number of book bannings around the country has reached a level not seen for many years.

Censorship efforts have happened in places like Florida and Tennessee. One Tennessee school board banned Art Spiegelman's graphic novel about the Holocaust, Maus. Other states have tried to pass similar measures.

There have also been strong reactions from individuals and free speech organizations. Stephana Ferrell is a mother of two in Orange County, Florida. At a local school board meeting, some officials criticized Maia Kobabe's graphic novel Gender Queer: A Memoir. The county decided last autumn to remove it from high schools. 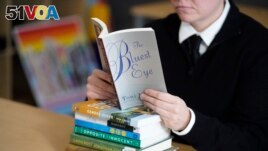 Ferrell said, "By winter break, we realized this was happening all over the state and needed to start a project to rally parents to protect access to information and ideas in school."

With another Orange County parent, she founded the Florida Freedom to Read Project. The group works with other parent groups in the state on a number of educational issues. Ferrell said they also work to "keep or get back books that have gone under challenge or have been banned."

Over the past year, book challenges and bans have reached levels not seen in many years. That information comes from officials at the American Library Association, the National Coalition Against Censorship, or NCAC, and other supporters of free speech.

"There are some books with pornography and pedophilia that should absolutely be removed from K through 12 school libraries," said Yael Levin. She is a spokesperson for No Left Turn in Education. The nationwide group opposes what it calls a "Leftist agenda" for public schools.

Bills have been proposed that restrict classroom reading and discussion around the country, says PEN America. The group works to defend free speech in the U.S. Almost all of the bills, it says, center on sexuality, gender identity or race.

In Missouri, a proposed bill would ban teachers from using The 1619 Project. That is a special project of the New York Times Magazine that centers around slavery in American history. It was released last year as a book.

In an answer to such moves, group like the American Civil Liberties Union, PEN America and the NCAC have been working with local activists, educators and families around the country.

The head of book publisher Penguin Random House, Markus Dohle, has said he will personally donate $500,000 for a book defense fund. Hachette Book Group has announced "emergency donations" to PEN, NCAC and the Authors Guild.

Vera Eidelman is a lawyer with the ACLU Speech, Privacy and Technology Project. She said the U.S. Supreme Court ruled in 1982 that "local school boards may not remove books from school library shelves simply because they dislike the ideas contained in those books."

However, Eidelman said, school officials are permitted to ban books for reasons other than not approving of the ideas in the books. Officials might decide, for example, that the book uses too much vulgar language.

But the meaning of vulgarity can change and be unclear, she said. And that can be used by the government to ban books.

Two anti-banning measures were started in Pennsylvania. In Kutztown, student Joslyn Diffenbaugh formed a banned book club that began with a reading of George Orwell's "Animal Farm." And the Pennridge Improvement Project has started a drive to purchase books that have been removed from schools and put them in small free libraries around the area.

Dan Novak adapted this story for VOA Learning English from reporting by The Associated Press.

graphic novel — n. cartoon drawings that tell a story and are published as a book

access — n. a way of being able to use or get something

challenge — n. an action, statement, etc., that is against something : a refusal to accept something as true, correct, or legal

pornography— n. movies, pictures, magazines, etc., that show or describe naked people or sex in a very open and direct way in order to cause sexual excitement

agenda— n. a plan or goal that guides someone's behavior and that is often kept secret

gender — n. the state of being male or female

vulgar — adj. not having or showing good manners, good taste, or politeness