US Pays to Clean Up Agent Orange Used in Vietnam War

Update Required To play the media you will need to either update your browser to a recent version or update your Flash plugin.
By Andrew Smith
31 December 2022


The United States announced a contract earlier this month worth up to $29 million to clean a chemical contamination in Vietnam.

The Bien Hoa Air Base in southern Vietnam is contaminated with dioxin from U.S. military actions during the Vietnam War. American forces used the herbicide Agent Orange widely during the conflict. Dioxin is one of the poisonous chemicals in Agent Orange.

The announcement of the contract is the most recent attempt to show cooperation between the two countries. It comes at the 50-year anniversary of the so-called Christmas bombings. In December 1972, U.S. forces dropped 20,000 tons of bombs on the cities of Hanoi and Haiphong. 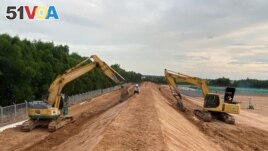 The nations now work together on trade issues, climate change, and the legacies of the war. However, disagreements remain.

"This announcement represents the United States' commitment to our partnership with Vietnam," said Aler Grubbs, director of the U.S. Agency for International Development's (USAID)
Vietnam office.

The agency said it finished a similar project in 2018 to clean up Agent Orange and other chemicals around Da Nang in central Vietnam. It said Bien Hoa would require dealing with four times as much soil as the Da Nang project.

Agent Orange is believed to be a cause of birth defects, cancers and skin disease, among other things.

Both the U.S. and Vietnamese governments are working on the cleanup across the country. The project is estimated to last more than 10 years at a cost of about $450 million. Washington said it expects to spend $300 million overall and has put more than $163 million towards the cleanup so far.

While the two countries have made progress working together, the U.S. has expressed worry about some issues. It wants Vietnam to announce support for freedom of speech and to release political prisoners. Vietnam, however, denies it has any such prisoners.

U.S. Secretary of State Antony J. Blinken said December 2 that Vietnam would be put on a "Special Watch List" for practicing or allowing "severe violations of religious freedom," along with Algeria, the Central African Republic, and Comoros.

Vietnam's Foreign Affairs Ministry did not accept being put on the watch list.

"Recently Vietnam has been finalizing the legal system and the policies on religion and belief," the ministry said in response on December 15.

The ministry claimed the international community has recognized Vietnam's work on freedom of religion and beliefs.

Meanwhile, the U.S. is trying to increase cooperation in areas such as environmental health and safety, USAID official Grubbs said.

contamination -n. pollution or other sources which lessen the purity of a substance

herbicide -n. a chemical used to kill plants and foliage

legacy -n. the lasting historical and cultural effects of a person or event

commitment -n. a promise to do something

defect -n. a problem in the design or manufacture of a mechanism or in the human body