Update Required To play the media you will need to either update your browser to a recent version or update your Flash plugin.
By VOA
08 August, 2014

On Thursday, President Barack Obama ordered the U.S. military to carry out "targeted airstrikes" against the militants. The Islamic State was formerly known as ISIL -- the Islamic State of Syria(应为Iraq) and the Levant.

The president said the military operation is part of a combined effort to support Kurdish forces in the north. Another goal, he said, is to provide humanitarian aid to Iraqi civilians threatened by militant action. 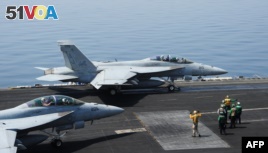 "Today I authorized two operations in Iraq: targeted air strikes to protect our American personnel, and a humanitarian effort to help save thousands of Iraqi civilians who are trapped on a mountain without food and water and facing almost certain death."

Mr. Obama spoke hours after U.S. aircraft dropped humanitarian aid on Iraq's Mount Sinjar. Thousands of displaced Iraqis have been living there for days without food, water or shelter. They fled up the mountain to escape from the Islamic State militants.

The refugees are mainly Christians or members of the Yazidi religious group. The militants are Sunni Muslims. They have threatened to kill non-Muslims if they reject Islam's teachings. They are also carrying out attacks on Muslims who are not Sunnis.

President Obama says the United States should act if it has the ability to avoid a humanitarian crisis.

"We can act carefully and responsibly to prevent a potential act of genocide. That's what we're doing on that mountain. I've therefore authorized targeted air strikes if necessary to help forces in Iraq as they fight to break the siege of Mount Sinjar and protect the civilians trapped there."

The president ordered air strikes against ISIL vehicles if they moved toward Irbil. He also approved strikes anywhere else in Iraq where the militants threaten American personnel and property.

On Friday, Britain expressed support for Mr. Obama's approval of air strikes. Defense Secretary Michael Fallon announced that his country would take part in the effort to aid Iraqi refugees.

The air strikes this week represent the biggest use of American military force in Iraq since U.S. troops withdrew from the country in 2011. The Iraq War lasted more than eight years.

President Obama said on Thursday that he would not send ground troops back to Iraq. His administration has faced public pressure to avoid new involvement in foreign conflicts.

In recent days, Islamic State forces and other militants have made gains against Kurdish forces in northern Iraq. The United States has a diplomatic office and military advisors in Irbil. The militants defeated the Kurdish forces in several towns. The group also says it has taken control of a major dam on the Tigris River. This would give militants control of power and water that supplies Baghdad.

Iraq's ability to answer the militant offensive has been slowed by a political leadership dispute. Prime Minister Nouri al-Maliki has faced repeated calls to leave office. His group won the most seats in a national election earlier this year, but efforts to form a new government have failed.

For the latest news, visit www.51voa.com

This report was written in Special English from stories by VOA reporter Jeff Seldin and reporter Lisa Schlein.

combined – adj. form of the verb combine – v. to mix or bring together

represent– v. to act in the place of someone else; to substitute for; to serve as an example

advisor – n. one who helps with information, knowledge or ideas in making a decision

leadership - n. those in a group who show the way, command, or control a group, organization or country