US to Provide 2 Billion Loan Guarantee to Ukraine


The United States plans to provide up to two billion dollars in loan guarantees to Ukraine this year. The U.S. Treasury Department announced the plan on Tuesday. The move is part of an international assistance package to support Ukraine. The country faces a financial crisis, partly because of tensions with Russia and separatists in the east.

The U.S. Treasury said the loan guarantees would be tied to Ukraine's government enacting economic reforms. The International Monetary Fund proposed the reform measures. IMF officials are in Kyiv this week. They are negotiating the details of an addition to a deal, which was said to be worth billions of dollars.

The U.S. Treasury Undersecretary has been meeting separately with Ukrainian officials. 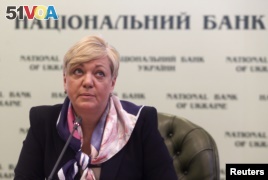 Ukraine, Russia, Germany and France have cancelled plans for talks this week on the conflict in eastern Ukraine. The nations did so because of a lack of progress in a truce agreement signed in September.

The summit between Ukrainian, Russian, German and French leaders was to take place in Kazakhstan on Thursday. However, fighting between Ukrainian government forces and separatists is continuing. Many people believe Russia is actively supporting the separatists. There is no sign that high-level talks on Ukraine will begin soon.

On Tuesday, an area spokesman said a shell struck a passenger bus, killing at least 10 people in the Donetsk area. At least 13 others were reportedly injured in the explosion.

The foreign ministers of Ukraine, Russia, Germany and France did hold talks in Berlin on Monday. However, they said "further work needs to be done" in holding the ceasefire agreement known as the Minsk Protocol before officials can meet.

Ukraine says more than 200 Ukrainian soldiers have been killed in separatist attacks since the truce was declared.

The separatists and Ukraine blame each other for violations of the cease-fire agreement. The conflict has killed more than 4,700 people and displaced hundreds of thousands since it began in April 2014.

In related news, the North Atlantic Treaty Organization, NATO, said it is planning to increase its military capabilities in the Baltic area.

On Tuesday, NATO's top military commander spoke about the conflict in Ukraine. U.S. General Philip Breedlove accused Russia of continuing to support separatist fighters in eastern Ukraine. He expressed concern over Moscow's "continued resupply, continued training and continued organization of the forces east of the line of conflict."

This story came from VOANews.com, with additional material provided by the Reuter news service. Mario Ritter wrote the story for VOA Learning English. George Grow was the editor.

package - n. a group of related things that are put together

protocol - n. a document describing a treaty or formal agreement between countries

capabilities - n. abilities, often relating to physical assets in a place that allow something to be done or carried out

What are your thoughts about the conflict between the government and separatists in Ukraine? Share them with us in the comments section.