US Praises Nuclear Deal with Iran, Others Concerned

Update Required To play the media you will need to either update your browser to a recent version or update your Flash plugin.
By VOA
03 April, 2015


The deal between Iran and six world powers to place limits on Iran's nuclear program has brought reactions from cheers to alarm around the world. Negotiators reached a framework of an agreement after eight days of intensive negotiation in Lausanne, Switzerland.

President Barack Obama praised the agreement as "historic" and "a good deal that meets our core objectives." He said the agreement would make the world safer and keep Iran from building a nuclear weapon if fully carried out. The president said the limits placed on Iran would be the strongest in history.

"This framework would cut off every pathway that Iran could take to develop a nuclear weapon. Iran will face strict limitations on its program, and Iran has also agreed to the most robust and intrusive inspections and transparency regime ever negotiated for any nuclear program in history."

Many Iranians welcomed news of the agreement, which would ease existing sanctions in exchange for a list of requirements meant to keep Iran from building a nuclear bomb.

Supporters welcomed Iranian Foreign Minister Javad Zarif on his return to Tehran. Hundreds of Iranians celebrated in the streets in hopes that their country's economic isolation would come to an end. And Iranian President Hassan Rouhani called it a "day that will remain in the historical memory of the Iranian nation."

Iranian hardliners, on the other hand, denounced the agreement as a bad deal.

In Israel, the reaction was of alarm. Prime Minister Benjamin Netanyahu called an emergency meeting of his security Cabinet Friday. He expressed strong opposition to the agreement. He said it "would pose a grave danger to the region and to the world, and would threaten the very survival of the state of Israel." He also said it helps Iran's economy while raising the risk of a nuclear arms race in the area.

The reaction was more restrained in the Gulf region. Saudi official media reported that King Salman voiced hope that a final settlement on the nuclear dispute would "strengthen the stability and security of the region and the world" in a phone call with President Obama.

Details of the Agreement

Besides the U.S., Britain, China, France, Russia and Germany negotiated the deal. Under the agreement, Iran is required to pull back its abilities to create a nuclear weapon. The deal centers on lengthening the time it would take for Iran to produce a nuclear bomb -- the so-called "break out" time. U.S. information says that Iran could produce enough material for a bomb in two to three months. The agreement lengthens that time "to at least one year, for a duration of 10 years." 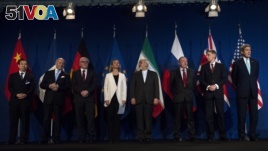 Diplomats involved in the nuclear talks

Iran also agreed to reduce the number of centrifuges -- devices used to enrich uranium -- by one third. The country is to keep about 5,000 centrifuges for 10 years.

In addition, the deal calls on Iran to reduce the enrichment level of its existing nuclear, or fissile, material. Iran will convert one nuclear facility so that it cannot enrich uranium, and it will redesign its Arak nuclear reactor so that it cannot produce weapons-grade plutonium.

United Nations inspections of all of Iran's nuclear facilities would be increased in order to verify that the agreement was being followed.

In exchange, Iran will receive relief from international sanctions. However, when sanctions will end remains a question. Iran's Foreign Minister Javad Zarif insisted Friday that they would be lifted immediately. He suggested that any U.S. official saying that was not the case would be wrong. But French Foreign Minister Laurent Fabius said in a radio interview that the issue of lifting sanctions was, in his words, "not yet resolved."

President Obama indicated that many details of the agreement have yet to be reached. He said on Thursday that the deal would be finalized over the next three months. In his words, "nothing is agreed to until everything is agreed." He also warned that "if Iran violates the deal, sanctions can be snapped back into place" -- although critics question how that could be done quickly or easily.

In Congress, Republican lawmakers have threatened to pass new sanctions on Iran. President Obama said critics of his effort to make a nuclear deal with Iran were wrong. He said failure to reach a deal would be called a failure of U.S. diplomacy.

If fully carried out, the deal could be considered the most important international agreement of Mr. Obama's presidency.

Bill Gallo, Scott Bobb and Mike Richman provided reporting for this story. Mario Ritter wrote it for VOA Learning English. Hai Do was the editor.

framework – n. a set of ideas or facts that provide support for something

fissile – adj. about to undergo nuclear fission, able to cause a nuclear reaction

verify – v. to prove, show, find out or state that something is true, correct or completed

duration – n. the length of time that something exists or lasts

Do you think the six nations have reached a good deal with Iran? Leave your thoughts in the comments section below.