Update Required To play the media you will need to either update your browser to a recent version or update your Flash plugin.
By VOA
09 September, 2015

The agreement, or deal, would limit Iran's ability to develop nuclear weapons. In exchange, the U.S. and world powers would ease economic sanctions against Iran.

The Democratic candidate, Hillary Clinton, spoke for about 60 minutes at a respected Washington think tank – the Brookings Institution. Ms. Clinton, who served as President Obama's Secretary of State from 2009 to 2013, described the deal as "not perfect," but "strong."

A few hours later, Republican candidates, Donald Trump and Ted Cruz, spoke for a combined 30 minutes against the deal. Trump called the deal "incompetent" and "led by very, very stupid people," at the event on the lawn of the U.S. Capitol, where Congress will vote on the agreement. 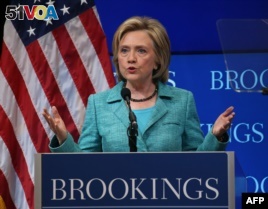 The event was co-sponsored by the Tea Party Patriots, a conservative political organization. It featured about a dozen speakers who frequently mentioned support for Israel, the Bible, patriotism and terrorism.

Iran has agreed to limit its nuclear development in exchange for fewer economic sanctions. The sanctions were imposed by Western nations after the revolution in Iran in 1979. At that time, a conservative, religious party took over the government.

The agreement will allow the International Atomic Energy Agency (IAEA) to inspect Iran's nuclear facilities to ensure compliance. Clinton said, "It accomplishes the major goals we set out to achieve."

If Iran were to violate the agreement, Ms. Clinton said her response would be swift and strong.

"The U.S. will never allow you to acquire a nuclear weapon," Mrs. Clinton said. "As president, I will take whatever actions are necessary. I will not hesitate to take military action."

To critics of the deal who point to Israel's security, Ms. Clinton said the U.S. would support Israel in several ways:

The region could be stabilized by a strategy in which more partners participate politically, Mrs. Clinton said. She pointed to Russia, specifically, as an instigator of Mideast chaos.

Russia's foreign minister admitted Tuesday that "Russian military experts" were supporting Assad in the country's civil war. Radical terrorist groups, such as the Islamic State militants, also known as ISIS, are active in the region. Hundreds of thousands of refugees have fled war-torn countries in the Mideast to Europe.

"Like ISIS, Iran benefits from chaos," Ms. Clinton said. "It's crucial that the U.S. leads this effort and pushes its diplomatic strategy."

Republican rally at the Capitol

The Republican rally against the agreement seemed like a small rock-music concert at times. 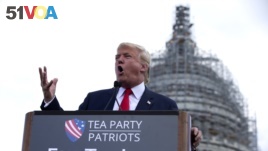 Senator Ted Cruz is also an organizer of the event. He said if the U.S. enters the deal with the Iran, the U.S. would become "the world's leading financier of radical Islamic terrorists."

The Republican senator and presidential candidate added, "$100 billion will flow to radical Islamic terrorists across the world, who will use the money to murder Americans and Israelis."

Senator Cruz predicted that Iran would "kill tens of millions of Americans" if they developed nuclear weapons.

Businessman Donald Trump leads the large Republican pack of candidates for president in the race. He spoke briefly but strongly against Iran and the proposed agreement.

"They rip us off, they take your money, they make us look like fools," he said about Iran. "They will not let Israel survive. And then, when it's all done, they come out with these unbelievable nasty statements" about the U.S.

Trump said Iran and countries that will do business with it when sanctions are lifted, "They are going to make lots of money, and lots of other things with Iran, and we are going to get nothing.

"Nothing. We are led by very, very stupid people. We cannot let it continue."

Trump concluded his comments by saying if he is elected, "you will be bored with winning."

The crowd on the Capitol lawn was estimated to be around several hundred people. The U.S. Congress is expected to vote against the nuclear deal. But the Republican-led Congress does not have enough votes to override the expected veto from President Obama.

compliance -- n. the act or fact of going along with a wish or command

instigator -- n. a person who brings about change, good or bad