US Candidates Plan to Stop Trump from Winning Nomination

Update Required To play the media you will need to either update your browser to a recent version or update your Flash plugin.
By Christopher Jones-Cruise
25 April, 2016


Two U.S. presidential candidates will work together and try to stop Donald Trump from becoming the Republican Party's presidential nominee.

The businessman has been leading in the race for the Republican presidential nomination since February 9, when he won the New Hampshire primary. 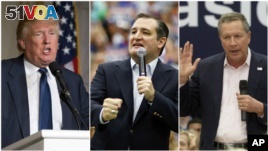 Former senator and secretary of state Hillary Clinton has won the most delegates in the race to become the Democratic Party's candidate for president.

Barack Obama has served two four-year terms as president. That is the most permitted under the U.S. Constitution. Obama will leave office in January.

Some political observers thought Trump would not be successful in his campaign for the Republican nomination. But he has won primaries and caucuses in many states. He now controls the largest number of delegates to the party's nominating convention. That meeting will take place in July.

However, many top Republican officials do not like Trump. His positions on immigration and foreign policy are different from those of many Republicans. Some officials worry that Trump will not support the party's positions.

But with less than three months before the convention, Trump is the only candidate with a chance to win the majority of delegates needed to become the Republican nominee.

Both Cruz and Kasich have each said many times that Trump will hurt the Republican Party if he is the nominee. They believe if he is nominated, the Democratic party's nominee -- who many experts believe will be Clinton -- will easily win the election in November.

On Sunday, Cruz and Kasich announced their plan to stop Trump from winning enough delegates to win the nomination. Representatives from each campaign announced that Kasich will let Cruz try to win the presidential primary in the Midwestern state of Indiana. That primary will take place on May 3.

Indiana has 57 delegates. The winner of the primary will get 30 of them. The rest will be given to the winner in each of the state's nine congressional districts.

Recent public opinion surveys showed that Trump has the support of 39 percent of likely Republican voters in Indiana. Cruz has 33 percent, and Kasich has 19 percent. If some of Kasich's supporters vote for Cruz, he could easily beat Trump and win most of the state's delegates.

The Cruz campaign said the agreement with Kasich is designed to ensure that the Republican nominee is someone who can unite the party.

"Having Donald Trump at the top of the ticket in November would be a sure disaster for Republicans. Not only would Trump get blown out by Clinton or (Vermont Senator Bernie) Sanders, but having him as our nominee would set the party back a generation," Cruz campaign manager Jeff Roe said.

During the campaign, Trump has repeatedly criticized the Republican Party as being unfair to him. He said the effort by Cruz and Kasich to work together to deny him the nomination is "sad."

"Because of me, everyone now sees that the Republican primary system is totally rigged. When two candidates who have no path to victory get together to stop a candidate who is expanding the party by millions of voters -- all of whom will drop out if I am not in the race -- it is yet another example of everything that is wrong in Washington and in our political system," Trump said.

In exchange for not campaigning in Indiana, Kasich was promised that Cruz would not campaign in the Western states of Oregon and New Mexico.

"Our goal is to have an open convention in Cleveland, where we are confident a candidate capable of uniting the party and winning in November will emerge as the nominee," the Kasich campaign said.

Both the Cruz and Kasich campaigns said they will compete against one another in the other states that have yet to choose delegates.

If a majority of Republican delegates do not vote for Trump as the nominee on the first election of the convention, there will be a second vote. The party's rules permit the delegates that Trump won during the primaries and caucuses to choose another candidate -- or vote for Trump again. This means Cruz or Kasich, or even someone who stopped campaigning or never campaigned, can be chosen by the delegates as the party's presidential nominee.

Chris Hannas reported this story for VOANews. Christopher Jones-Cruise adapted it for Learning English. George Grow was the editor.

convention – n. a large meeting of people who come to a place for (usually) several days to talk about their shared work or other interests or to make decisions as a group

ensure – v. to make (something) sure, certain, or safe

top of the ticket – expression the presidential candidate; the top candidate

rig – adj. to control or affect (something, such as a game or election) in a dishonest way in order to get a desired result

emerge – v. to become known or regarded as something