US Promises 18 Million for Vietnam to Buy Patrol Boats

U.S. Defense Secretary Ashton Carter was in Vietnam Monday to increase military ties between the two countries. As part of that effort, he and Vietnam's defense minister signed what officials called a "vision statement" to guide the expansion of U.S.-Vietnamese cooperation.

Secretary Carter examined a Vietnamese naval patrol boat during a visit to a naval base at Haiphong. A Chinese ship had struck and damaged the boat last year in waters claimed by Vietnam in the South China Sea. 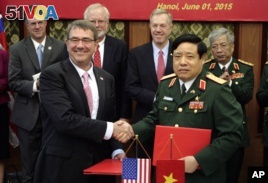 Mr. Carter said the United States opposes militarization and the creation of tensions in the South China Sea. He called for a halt to land reclamation activities by all countries claiming territory in the waterway.

Vietnam is among several countries with island-building projects in the South China Sea. However, China has the largest such projects under development.

Over the weekend, China rejected U.S. criticism of its land reclamation efforts in the South China Sea. The subject was one of many discussed at a security conference, which ended on Sunday.

The meeting, known as the Shangri-La Dialog, took place in Singapore. One of the speakers was Chinese Admiral Sun Jianguo. He described his country's efforts to develop the South China Sea as "justified, legitimate and reasonable. And he added that China is performing "international public services."

The Chinese military officer spoke to a group of military officers, diplomats, Asian experts and news reporters. The admiral was asked for clarification of his comments. But he offered none.

That left most everyone attending concerned about China's plans for the South China Sea, said Bonnie Glaser. She studies Asian issues for the Center for Strategic and International Studies.

"To simply read prepared answers to questions demonstrates, I think, an in-your-face dismissal of the concerns that were expressed here by members of the international community. And I think there will really be great disappointment."

U.S. Defense Secretary Carter also spoke at the conference. He said China's activities in disputed waters put it, in his words, "out of step with both the international rules and norms that underscore the Asia-Pacific security architecture."

"Our position, just to be clear, is that all of the claimants to be the South China Sea dispute should halt reclamation, not further militarize those features and pursue a peaceful resolution."

U.S. military officials say their ships and airplanes will not obey Chinese calls to stay away from parts of the South China Sea. They say the U.S. military is operating in international waters and air space. In May, a U.S. spy plane flew over several man-made islands in the disputed area. The plane ignored eight warning messages from the Chinese Navy.

The Chinese government claims many small islands in the South China Sea as its territories. But other nations disagree. Many of them have their own competing claims in the area.

VOA correspondent Steve Herman reported this story from Singapore. George Grow adapted it for Learning English. Hai Do was the editor.

patrol – adj. to guard or observe; to go through an area in an effort to make sure that it is safe

vision – n. the ability to see

militarization – n. the build-up of military forces and equipment

reclamation – n. development of an area; in this example, the expansion of islands and coral reefs