US Proposes Rules for Commercial Use of Drones

Update Required To play the media you will need to either update your browser to a recent version or update your Flash plugin.
By George Grow
18 February, 2015


The Federal Aviation Administration has written rules to govern the use of commercial drones in the United States. The proposed rules were released on Sunday at the same time as a presidential order telling federal agencies how they may use such aircraft. President Barack Obama ordered the agencies to be open with Americans, and to protect their civil liberties.

The rules would permit new uses of drone aircraft weighing less than 25 kilograms, often called "micro-drones." Businesses could use them to perform such jobs as watching over crops or inspecting bridges or electrical towers.

The rules would require drone operators to be at least 17 years old and pass a written test to get a special pilot certificate. Operators would be permitted to fly drones only during the day. They would be permitted to fly no higher than 152 meters, and no faster than 160 kilometers an hour. In addition, an operator would have to be able to see the unmanned aerial vehicle, or UAV, while they are operating it. 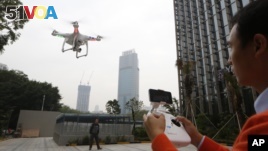 UAVs would be banned from flying over people or in the area around airports. News organizations would still be barred from taking pictures using drones.

The rules do not permit companies to use drones to carry packages. But as technology changes, the rules could be amended. Some businesses have already announced plans to use drones to transport goods or products.

"The technology of drones is advancing at such a rapid rate that, even if the FAA tried to the best of its ability to put out regulations very quickly, they would probably be superseded by the technology. So having some sort of guidance now, even though it's not official, will bring some kind of sensibility and some kind of limitations to what commercial people plan to do with drones."

Mr. Curtis says the use of drones for some projects will replace pilots, because manned aircraft will not be necessary.

Michael Huerta heads the Federal Aviation Administration. He says the FAA will use public education campaigns and fines to enforce the new rules after they have been approved. The federal agency is still writing rules for larger drones. That process could take years.

Micro-drones have become popular in the United States. They are operated by hobbyists -- people who fly drones for the love of it.

Smaller UAVs -- those weighing less than two kilograms -- have few restrictions. They cannot fly any higher than 122 meters, must stay eight kilometers away from airports and must remain in the line-of-sight of the operator.

The FAA rules are designed to balance flight safety with the economic possibilities of drones. But President Obama's memo is aimed at protecting the privacy of American citizens. His order requires federal agencies to guard against the abuse of information collected from their drone flights. It also requires examination of agency policies, and openness in making those policies public. And it calls for a partnership between the government and business in creating guidelines for the commercial use of drones.

The rules are still months or years away from going into effect.

federal - adj. having to do with a national or central government

aircraft - n. a vehicle that flies

civil liberties - n. the right of people to do or say things that are not illegal without being stopped or interrupted by the government

Do people or governments use drones in your country? Has the government written rules about their use? We want to hear from you. Write to us in the comments section.