Update Required To play the media you will need to either update your browser to a recent version or update your Flash plugin.
By Andrew Smith
04 January 2023


The United States Embassy in Cuba is reopening visa and consular services on Wednesday. The embassy says it will prioritize immigration permits to help Cubans join their families in the U.S.

The move comes during one of the largest waves ever of Cuban migration to the U.S. Economic and political problems on the island are among reasons Cubans are leaving.

The embassy expects to give out at least 20,000 visas a year. But that is just a small part of the total number of Cubans migrating towards the U.S. 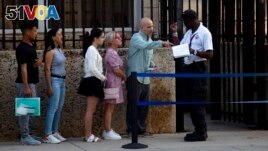 People stand in line outside the U.S. embassy on the day of its reopening for visa and consular services in Havana, Cuba, Jan. 4, 2023. (AP Photo/Ismael Francisco)

In late December, U.S. officials reported stopping Cubans 34,675 times along the Mexico border in November, up 21 percent from 28,848 times in October.

That number has slowly risen each month. Cubans are now the second-largest nationality after Mexicans appearing on the border, U.S. Customs and Border Protection data shows.

Most Cuban migrants come to the U.S. after first traveling to Nicaragua by air and then going by land to the U.S. border with Mexico. However, others make a dangerous trip by sea. They travel 90 miles to the Florida coast in unsafe boats filled with migrants.

The renewal of visa work at the embassy comes after a series of migration talks and visits by U.S. officials to Cuba in recent months. It may be a sign that relations between the two governments are slowly improving.

Visa and consular services were closed on the island in 2017 after embassy staff were struck by many health problems, possibly caused by sonic attacks. However, the attacks remain largely unexplained.

The administration of U.S. President Joe Biden has reduced some of the restrictions on things like money sent to Cubans from family living in the U.S. and travel from Miami to Cuba. But restrictions on tourist travel to Cuba remain in place. So do restrictions on imports and exports of many goods.

The U.S. has also disagreed with the Cuban government's treatment of protesters in 2021. At that time, people were protesting a lack of food and medicine and the government's response to the Covid-19 pandemic.

However, Cuban officials have repeatedly said they are hopeful about talks with the U.S. and steps to reopen visa services. Cuban Deputy Foreign Affairs Minister Carlos Cossio said in November that making sure migration is safe and legal is a shared goal of both countries.

But Cossio also blamed the migration of tens of thousands from the island on U.S. sanctions. He said U.S. policies that aim to lower the quality of life in Cuba are a direct cause of migration.

consular -adj. referring to work an embassy does for the citizens of its country

prioritize -v. to consider something as the most important or to be done first, before other things

sanctions -n. restrictions, limitations, often of a financial nature, against an organization or country, commonly used to pressure or punish.