US Restricts Use of J&J's COVID Shot

Update Required To play the media you will need to either update your browser to a recent version or update your Flash plugin.
By Hai Do
06 May 2022


American health officials have placed strong restrictions on the use of Johnson & Johnson's COVID-19 vaccine. The treatment carries a risk of rare but serious blood clots.

The United States Food and Drug Administration, or FDA, said the J&J shot should only be given to adults who cannot or will not accept a different COVID vaccine. U.S. health officials have suggested for months that Americans get Pfizer-BioNTech or Moderna shots instead of J&J's vaccine.

FDA vaccine chief Dr. Peter Marks said the agency acted after examining the data on the risk of life-threatening blood clots. The FDA found that the risk is limited to J&J's shot in the first two weeks after vaccination. 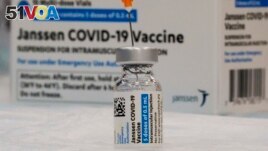 FILE - In this April 8, 2021 file photo, the Johnson & Johnson COVID-19 vaccine is seen at a pop up vaccination site in the Staten Island borough of New York. American health officials have placed strong restrictions on the use of the vaccine.(AP Photo/Mary Altaffer, File)

"So if you had the vaccine six months ago you can sleep soundly tonight knowing this isn't an issue," Marks said.

"But," he added, "compared to no vaccine-- this is still a better option."

The FDA approved J&J's shot in February last year for adults. The vaccine was considered an important tool in fighting the pandemic because it required only one shot. But the single-shot vaccine proved less effective than those from Pfizer and Moderna.

In December, the U.S. Centers for Disease Control and Prevention suggested Moderna and Pfizer shots over J&J's because of its safety issues.

As of mid-March, federal scientists had identified 60 cases of the side effect, including nine that resulted in death. That amounts to 3.23 blood clot cases per 1 million J&J shots. The problem is more common in women under 50, where the death rate was around 1 in one million shots, Marks said.

The J&J COVID vaccine will carry a warning about possible "long-term and debilitating health consequences" of the side effect.

A J&J spokesman said in an emailed statement: "Data continue to support a favorable benefit-risk profile for the Johnson & Johnson COVID-19 vaccine in adults when compared with no vaccine."

The blood clot problems were first reported last spring, with the J&J shot in the U.S. and with an AstraZeneca vaccine used elsewhere. At that time, U.S. health officials decided the benefit of J&J's vaccine outweighed what was considered a very rare risk.

Symptoms of the rare blood clots include severe headaches, a week or two after the J&J vaccination, as well as stomach pain and nausea.

Pfizer and Moderna have provided a large majority of COVID-19 vaccines in the U.S. More than 200 million Americans have been fully vaccinated with the companies' two-shot vaccines while less than 17 million Americans got the J&J shot.

option - n. opportunity or ability to choose something

profile - n. a representation of information relating to something