US Nurse with Ebola Is 'Doing Well'

Update Required To play the media you will need to either update your browser to a recent version or update your Flash plugin.
By VOA
14 October, 2014


The Texas nurse who became the first person sickened with the Ebola virus on U.S. soil says she is "doing well."

Texas Health Presbyterian Hospital in Dallas released a statement Tuesday from Nina Pham. She said she wants "to thank everyone for their kind wishes and prayers."

The hospital is the same where Ms. Pham was infected while caring for a Liberian man. He is first person to die of Ebola in the United States.

Ms. Pham received a blood transfusion from Kent Brantly, the American doctor who recovered from Ebola in the U.S. after getting the disease in Liberia.

Meanwhile, a German hospital says a United Nations medical worker who became sick with Ebola virus while in Liberia has died. The UN Mission in Liberia reported last week that tests showed the 56-year-old worker was infected on October 6th. UN officials said none of the 41 people who may have been in contact with the person had shown any signs of the disease. 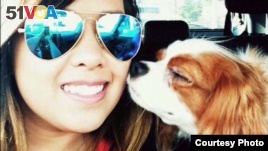 Nina Ph?m is seen here in an undated photo released by her family.

The World Health Organization says the number of Ebola cases in West Africa is significantly underreported, and is likely two times greater than thought.

Mr. Aylward, spoke to reporters Tuesday in Geneva. He said the official death toll from the Ebola virus has risen to 4,447. Nearly all of these are in West Africa. The number of reported cases is now more than 8,900.

Hong Kong police used chainsaws and other power tools on Tuesday to remove barriers from a main street in the city's financial area. Protesters have been living there for over two weeks. They are demanding political reforms. 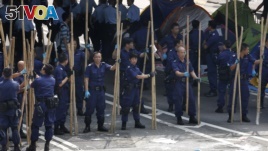 Hundreds of police tore down pro-democracy signs and crushed shelters along the Queensway in the Admiralty area of central Hong Kong.

Crowds of protesters, some crying, exchanged words with police but did not resist. Police gave protesters permission to remain, but said they must not block traffic or the transport lines that run through the middle of the street.

Hours earlier, police removed metal barricades at another protest site in the nearby Causeway Bay shopping area. Police said the move was designed to free up traffic. 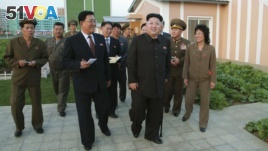 The official Korean Central News Agency said Tuesday he visited a housing area and a science center, where he gave "field guidance." The news agency and the country's main newspaper published several pictures of Mr. Kim smiling and leaning on a black cane.

The reports did not say when the photos were taken. They also did not explain why he was carrying the cane.

The disappearance of Mr. Kim led observers to wonder whether he was suffering a serious health or political problem.

hospital – n. a place where sick or injured people are given medical care

contact – v. to meet or communicate with; n. the act of touching or being close to a person or thing

tools – n. instruments or devices designed to help one to do work

barriers – n. things that block or make an action difficult

resist – v. to oppose; to fight to prevent