US Rushes to Admit Refugees Before End of September

Update Required To play the media you will need to either update your browser to a recent version or update your Flash plugin.
By Jim Dresbach
20 September, 2016


The month of September has been one of the busiest months for the arrival of refugees in the United States.

Almost 79,000 refugees from 78 countries have come to the U.S. since October of last year. That is the largest number of refugees coming to America in 17 years, according to official data.

The effort to bring more Syrians fleeing violence in their country has made September the busiest month for arrivals in 10 years.

The U.S. refugee program is operated by several federal agencies. These agencies still expect that 85,000 refugees will arrive by the end of September.

Michel Tonneau is a staff member with the U.S. refugee program at the International Organization for Migration's Washington office. He said his agency had bought enough airplane tickets for the targeted number of refugees to reach the U.S. by the end of the month.

He said September is usually a busy time for the arrival of refugees. The refugee program tries to get close to the target number without exceeding it.

The actual number of refugees often falls a little short of the target. That happened last year. President Barack Obama and the State Department decided 70,000 refugees would be allowed into the U.S., and the country admitted 69,933.

European countries struggled to process hundreds of thousands of refugees and asylum-seekers in 2015. President Obama announced an increase in the number of refugees the U.S. would accept for resettlement this year. The number rose to 85,000 from 70,000. The decision included the goal of admitting 10,000 Syrian refugees. 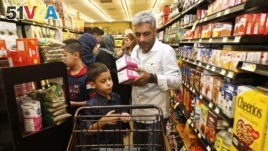 Nadim Fawzi Jouriyeh, a Syrian refugee who arrived recently in the United States with his wife and four children, puts items in a cart while shopping with his son, Farouq Nadim Jouriyeh, in El Cajon, Calif., Aug. 31, 2016.

The summer months saw a sharp increase in arrivals. The numbers increased because many Syrian families quickly came from Jordan.

"July and August were so crazy. We definitely felt the push," said Aerlande Wontamo, regional director for Lutheran Social Services of the National Capital Area.

The social services group finds immediate housing for families of refugees. Someone from the service provides transportation, helps enroll children in school and provides support in a new country.

The government set a goal of 100,000 for the coming fiscal year. The fiscal, or financial year, begins October 1. Media reports this week have suggested that Obama will raise that target to 110,000 refugees.

The U.N. refugee agency registered 16.1 million refugees in 2015. Only about 107,000 of those individuals were relocated to countries that volunteer to take displaced persons. These countries include the U.S., Canada and Australia.

Bill Canny heads migration and refugee services for the U.S. Conference of Catholic Bishops. He said the current effort is not good enough.

"Those figures are incredibly low...," Canny said. "We can all do better, including the United States."

Victoria Macchi at VOA News wrote this story. Jim Dresbach adapted it for Learning English. Mario Ritter was the editor.

enroll – v. to enter someone as a member of or participant in something