Update Required To play the media you will need to either update your browser to a recent version or update your Flash plugin.
By Dan Novak
21 January 2023


Social media companies are facing legal action seeking to hold them accountable for the mental health crisis among youth.

The lawsuits came recently from the public schools in Seattle, Washington and a suburban school system. But the new lawsuits face a complex legal path.

The lawsuits argue the social media platforms push harmful content. The U.S. Supreme Court is to hear arguments next month over how much federal law protects the tech industry from such claims. But even if the school systems are able to move forward with their lawsuits, it will be difficult to prove the industry is at fault. 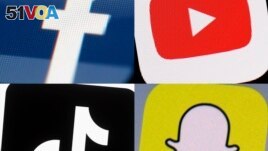 Seattle Public Schools on Friday sued the tech companies behind TikTok, Instagram, Facebook, YouTube and Snapchat. They argued the companies created a public nuisance by targeting their products to children. The Kent School District south of Seattle filed a lawsuit Monday.

The districts blame the companies for increasing mental health and behavioral disorders including anxiety, depression, disordered eating and cyberbullying. They say the mental health problems have made it harder to educate students and have forced schools to take steps like hiring more mental health professionals. Schools have also had to create lesson plans about the effects of social media and provide more training to teachers.

"Our students ... face unprecedented learning and life struggles that are amplified by the negative" effects of increased screen time," Seattle Superintendent Brent Jones said in an emailed statement last week.

Federal law helps protect online companies from legal action based on what users post on their platforms. But the lawsuits argue the law does not protect the behavior in this case, where the companies' own systems push harmful content.

If the high court's decision makes clear that tech companies can be held responsible, the school districts will still have to show that social media was in fact to blame. Seattle's lawsuit says that from 2009 to 2019, there was about a 30 percent increase on average of students reporting feeling very "sad or hopeless almost every day" for weeks at a time.

But Szabo pointed out that Seattle's graduation rates have been on the rise since 2019. If social media were so harmful to the district's educational efforts, the graduation rate would not be rising, he said.

The lawsuit centers on "how social media harms kids, and there might be evidence of that," said Eric Goldman. He is a professor at Santa Clara University School of Law in Silicon Valley. "But there's also a lot of evidence that social media benefits teenagers and other kids."

The companies have said they take the safety of their users, especially kids, seriously. Some have introduced tools to make it easier for parents to know whom their children are contacting and have created mental health resources.

Both cases were filed in U.S. District Court in Seattle and are based on state public nuisance law. In Washington, public nuisance is generally defined as an act that endangers the safety or health of a large number of people.

Most famously, public nuisance claims helped bring a $246 billion settlement from the tobacco industry in 1998. But public nuisance law also has been a part of lawsuits seeking to hold oil companies responsible for climate change, the gun industry for gun violence, the pharmaceutical industry for the opioid crisis and vaping companies for teen vaping.

Jolina Cuaresma is a lawyer with Common Sense Media, which aims to make media safer for children. She said she was excited to see a school district make a public nuisance claim against the tech companies.

"Folks have become tired waiting for Congress to do something," she said.

lawsuit — n. a process by which a court of law makes a decision to end a disagreement between people or organizations

recommend — v. to say that something is good and deserves to be chosen

nuisance — n. a person, thing, or situation that is annoying or that causes trouble or problems

unprecedented — adj. not done or experienced before

amplify — v. to increase the strength of

graduation — n. the act of receiving a diploma or degree from a school, college, or university