Update Required To play the media you will need to either update your browser to a recent version or update your Flash plugin.
By Bryan Lynn
13 December 2022


American scientists have announced a "major scientific breakthrough" in the long-sought search for a way to use nuclear fusion to produce energy.

The announcement came Tuesday during a briefing by U.S. Energy Secretary Jennifer Granholm and other officials in Washington, D.C. Granholm said that, for the first time, a fusion reaction experiment had produced more energy than was required to ignite it.

Scientists describe such a result as "net energy gain." This state has until now been an unreachable goal for the scientists because fusion happens at extremely high temperatures and pressures. This makes the process very difficult to control. 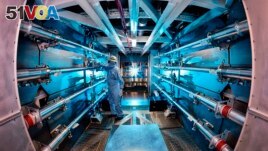 The new result came last week during an experiment carried out by government scientists at the National Ignition Facility at the Lawrence Livermore National Laboratory in California. The lab is part of the U.S. Department of Energy.

Fusion happens when the nuclei of two atoms are subjected to extreme heat. This leads to the formation of a new, larger atom and the release of energy. Fusion is the process that fuels stars, including the sun.

Scientists have long understood how nuclear fusion works. Many have tried to repeat the process on Earth. The current efforts centered on fusing a pair of hydrogen isotopes — deuterium and tritium. The Department of Energy says that the combination releases "much more energy than most fusion reactions." It also requires less heat to do so.

Some experts have suggested that fusion energy could one day be used to provide limitless, pollution-free power.

Granholm and other officials said Tuesday that the latest result is a major step forward in helping to create a future source for clean power generation. However, they said commercialization of the technology will likely take many years to be fully developed.

Granholm said the department's ignition success permits scientists for the first time to copy "certain conditions that are found only in the stars and the sun." She added that the result is a major step toward "the possibility of zero-carbon abundant fusion energy powering our society."

The experiments involved aiming nearly 200 lasers at a small capsule that contained fuel. When the lasers ignited the fuel, two lighter atoms were joined together to create a denser one. This process produced more energy than was required to ignite it, the scientists said.

Nuclear scientists not involved in the latest result praised the success as a major breakthrough. But they noted there is much more science to be done before fusion can develop into a profitable industry.

Riccardo Betti is a professor at New York's University of Rochester and an expert in laser fusion. He compared the latest result to when humans first learned that refining oil into gasoline and igniting it could produce an explosion.

Tony Roulstone is a nuclear energy expert at the University of Cambridge in Britain. He told Reuters news agency that while interesting, the latest experiment still leaves scientists a long way from turning the process into useful, limitless energy.

Roulstone said that in order to become commercially successful, a power plant would have to produce enough energy to also power the laser equipment and generate a continuous ignition process.

Bryan Lynn wrote this story for VOA Learning English, based on reports from the U.S. Department of Energy, The Associated Press and Reuters.

ignite – v. to make something start to burn

commercialize – v. to organize something to make a profit

milestone – n. an important event in the develop or history of something