Update Required To play the media you will need to either update your browser to a recent version or update your Flash plugin.
By George Grow
03 October, 2014

The head of the security force guarding the president of the United States resigned this week. Secret Service Director Julia Pierson offered her resignation on Wednesday, a day after she faced a United States congressional committee.

Committee members spoke with her at length about an incident two weeks ago at the White House. They wanted to know how a man was able to jump over a fence and get deep inside the presidential home. President Barack Obama and his family were not in the building at the time. 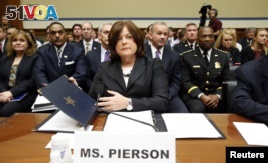 The Secret Service has said the suspect, Omar Gonzalez, was arrested just inside the main entrance to the White House. Officials at first said he was unarmed. But it was later learned he was carrying a knife.

Omar Gonzalez formerly served in the U.S. military. He is now 42-years old and homeless, having no permanent place to live.

Last month, a judge ordered him held without bail, barring any possibility of release before action on his case. At the court hearing, government lawyers said that investigators found ammunition, two hatchets and a long knife inside his vehicle. They also said he was stopped, but not arrested, in August, after he walked past the White House with a hatchet. A month earlier, he was arrested in Virginia after state police found weapons in his car.

On Tuesday, members of Congress sharply questioned Julia Pierson. She admitted that the Secret Service had made missteps.

"It's clear that our security plan was not properly executed. This is unacceptable, and I take full responsibility, and I will make sure that it does not happen again."

She was also asked about another incident. In 2011, gunfire hit the White House. But it took days for the Secret Service to discover that the building had been hit.

Several lawmakers blamed Ms. Pierson for sending mixed signals about whether agents could use deadly force if they felt the president is in danger. Some said the height of the White House fence was not the problem. They noted that several levels of security failed to stop the fence-jumper until he had crossed the grounds, opened the door, and run through the main floor of the White House.

Hours after the committee hearing, news media began reporting about another security breach. It involved an armed security guard with a criminal record. He reportedly stood just centimeters from President Obama last month. The incident took place during the president's visit to the Centers for Disease Control and Prevention in Atlanta, Georgia.

A presidential spokesman told reporters that Mr. Obama learned of the incident shortly before it was made public. Spokesman Josh Earnest said the president continues to have complete trust in the Secret Service. He said Mr. Obama accepted Ms. Pierson's resignation because he agreed with her judgment that it was in the best interest of the agency.

"They reached that conclusion because of the recent and accumulating reports about the performance of the agency, and that is what led the president to believe that new leadership is required."

The press secretary said President Obama spoke by telephone to Ms. Pierson and expressed thanks for her 30 years with the Secret Service.

A short time later, Homeland Security Director Jeh Johnson announced her replacement. He is Joseph Clancy, a former Secret Service special agent. In a statement, Mr. Johnson noted how Secret Service agents protected the president and 140 visiting heads of state without incident last weekend. They were in New York for the United Nations General Assembly. Mr. Johnson added that, "no other protection service in the world could have done this."

This story was reported by VOA correspondent Aru Pande in Washington. George Grow wrote it for Learning English. Christopher Cruise produced and edited it.

jump – v. to push down on the feet and move up quickly into the air

suspect – v. to imagine or believe that someone is guilty of something bad or illegal

suspect - n. a person believed to be guilty

breach – n. breaking or failing to obey a law or agreement