Update Required To play the media you will need to either update your browser to a recent version or update your Flash plugin.
By Susan Shand
24 March 2021


There are growing concerns that the United States is failing to counter China's rising power around the world.

For the past eight years, China's Belt and Road Initiative, BRI, has financed many international projects, including roads, railways, electric power and telecommunications systems.

The report released Tuesday by the Council on Foreign Relations also said the "U.S. withdrawal" created an opportunity for China to fill with BRI. 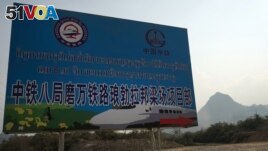 This picture taken on February 8, 2020 shows a sign in Lao and Chinese referring to the construction of the first rail line linking China to Laos, a key part of Beijing's 'Belt and Road' project across the Mekong, in Luang Prabang. (AFP)

It said that the U.S. knew of the importance of building in Asia but did not try to meet the needs of the area. American "lending to and investment in many BRI countries was limited and is now declining," it said.

David Sacks is a researcher at the CFR and one of the writers of the report.

He told VOA that China is now "anywhere and everywhere."

The BRI is increasing "China's ability to project its power across the region and the world," said Jack Lew. He was a U.S. Treasury secretary and the White House chief of staff during the Obama Administration.

"U.S. policymakers need to offer alternatives to BRI where it can and to educate other countries about what it entails and push back when necessary," he said.

China is now considered to be more powerful than the United States in parts of Africa and Asia because of the BRI, said former U.S. Trade Representative General Counsel Jennifer Hillman. She was also one of the writers of the CFR report.

The BRI is made up of the land-based Silk Road Economic Belt, the 21st Century Maritime Silk Road and the Polar Silk Road.

Hillman said the U.S. must rejoin trade agreements it left during the Trump presidency. She made the comment Tuesday during an online discussion about the report.

U.S. officials say the new administration of President Joe Biden is going to change the way America is seen.

A top administration official told VOA that competition with China is pushing the United States to intensify its diplomatic efforts.

The Trump administration countered the BRI with mostly small projects, including the Blue Dot initiative. Sacks said none of those efforts was given enough money to succeed.

The Biden administration this week launched the Small and Less Populous Island Economies Initiative, SALPIE. It aims to strengthen U.S. economic efforts with island countries and territories in the Caribbean, North Atlantic and Pacific regions.

"It's important to strengthen our alliances...among smaller countries that might otherwise come under a certain amount of pressure from China," a top administration official told VOA on Tuesday.

National Security Advisor Jake Sullivan and National Economic Council Director Brian Deese led an online event Monday with officials from island countries and territories. They were invited to partner with Washington under the SALPIE Initiative. It will bring together 29 U.S. government agencies to work on future projects.

counter - v. something that is made or done as a defense against or response to something else

decline - v. to become worse in condition or quality

alternative – n. a choice or an option

entail – v. to have (something) as a part, step, or result