Update Required To play the media you will need to either update your browser to a recent version or update your Flash plugin.
By Mario Ritter Jr.
07 April 2022

President Joe Biden nominated Jackson, a 51-year-old federal appeals court judge, earlier this year. She is set to become the first Black woman to serve on the high court.

Senate Majority Leader Chuck Schumer praised the vote, calling it "a wonderful day...for the Supreme Court and for the United States of America." 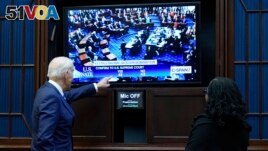 Jackson will join the high court when Justice Stephen Breyer retires this summer. She watched the vote on television with Biden at the White House on Thursday. They celebrated after the nomination was approved.

During her Senate confirmation hearings, Jackson spoke of her parents' struggles with racial segregation. She said her "path was clearer" because of civil rights laws passed in the 1960s before she was born. She attended Harvard University in Massachusetts, worked as a public defender and was a member of the U.S. Sentencing Commission.

Jackson will be the third Black person to serve on the court, after Justices Thurgood Marshall and Clarence Thomas. She will be the fourth woman on the court of nine Justices. The three other women who have served are Justices Sonia Sotomayor, Elena Kagan and Amy Coney Barrett.

The Senate confirmed Biden's choice by a vote of 53 to 47.

Collins said she was dissatisfied with the confirmation process. She called the process "broken."

The court currently has six conservative members and three liberal members. The justices have lifetime appointments. The lifetime terms are meant to ease political influence on the justices' decisions.

Jackson faced many questions about her record and her ideas about the law from the Senate Judiciary committee. The committee has 11 Democrats and 11 Republicans on it.

Republicans questioned Jackson's sentencing record during her confirmation hearings. Several of the senators said she gave sentences below the federal guidelines for people found guilty of having illegal sexual material showing children. Senate Minority Leader Mitch McConnell said that Jackson "never got tough once in this area."

But supporters of Jackson said she was in line with other judges in her decisions.

Senator Cory Booker, a Democrat from New Jersey, said he felt emotional as Jackson spoke to the committee. He said he saw "my ancestors and yours" in her image.

segregation –n. the policy of keeping people of different races, religions, or other qualities separate from each other