Is It Enough to Send More US Troops to Iraq?

Update Required To play the media you will need to either update your browser to a recent version or update your Flash plugin.
By George Grow
12 June, 2015


The United States says it is sending more troops to Iraq to prepare Iraqi forces in their fight against the Islamic State militant group. President Barack Obama has approved the deployment of 450 U.S. troops to train, assist and advise Iraqi security forces. The Americans also will work with Sunni Muslim tribesmen. Sunni militias have been working with Iraqi forces to take back Anbar Province from the militants. 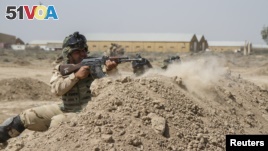 "It reflects the need for the United States, our coalition partners, and for the Iraqi government to be nimble as we respond to an adversary, an opponent on the ground in Iraq that has also demonstrated a capacity to adapt their tactics."

He said the troops will be sent to a military base in Anbar province, following requests from Iraqi Prime Minister Haider al-Abadi. A U.S. military spokesman said they could begin operations in six to eight weeks.

The United States is about to begin the second year of its campaign against the Islamic State, also known as ISIS or IS. The U.S. has been leading a coalition of countries against the militants. Coalition forces have carried out more than 4,400 airstrikes on IS targets in Iraq and Syria.

As the anniversary nears, some officials and experts are making clear that military might will not be enough to, in Mr. Obama's words, "degrade and destroy" the group.

Several observers say most people in the Middle East recognize that the militants are a violent threat to their communities. But they warn that getting the Arab public to fully support the fight against IS will not be easy.

Zogby International studies public opinion in the Arab world. One of its surveys showed that a majority of Arabs know the Islamic State is a dangerous group. Yet it found they do not support the bombing raids against IS forces. The head of Zogby International, Jim Zogby, spoke about the findings.

"They've lost confidence in the ability of the U.S. to use force and use it responsibly. Iraq was a terrible toll on the Arab psyche, and the (U.S.) behavior on Israel-Palestine has, has also had an impact. So simply knowing that the Arabs are afraid of, of ISIS doesn't translate immediately to 'America should lead a military attack against ISIS.'"

He added that many Arabs also are not happy to see the U.S. and Iran both fighting IS, a Sunni group that has attacked Shiite Muslims. Mr. Zogby says Arabs also see U.S. officials working with an Iraqi government that does not bring in all groups of the population.

Ryan Crocker formerly served as the U.S. ambassador to Iraq. He warns that without more American involvement, the future of Iraq does not look promising.

Bombing raids against IS targets are just not enough, observers say. They say a longer-term, political solution to the divide between Sunni and Shi'ite Muslims is necessary.

Another former ambassador to Iraq, Zalmay Khalizad warns that, without a solution, the U.S. government will always be fighting wars. Both former diplomats agree that without stronger involvement, the United States risks becoming less and less of a player in the Middle East.

This report was based on stories from VOA's News Division. George Grow wrote it for Learning English. Mario Ritter was the editor.

adversary – n. an enemy or opponent

tactic(s) – n. a method or plan of action

confidence – n. a belief or feeling that one can do something well

toll – n. an effect on someone or something; a tax or payment for services

translate – v. to have the same meaning or effect