US, S. Korea Forces on High Alert After Nuclear Test

Update Required To play the media you will need to either update your browser to a recent version or update your Flash plugin.
By George Grow
07 January, 2016


The United States and South Korea have ordered their military forces on the Korean peninsula on "high alert" following North Korea's nuclear test this week.

U.S. and South Korean officials, however, wonder whether North Korea has the ability to produce a thermonuclear hydrogen bomb. Such a weapon would be much more powerful than the three atomic bombs the North tested in the past.

The U.S. military is attempting to confirm if it was a hydrogen bomb test, as North Korea claims. The U.S. Air Forces reportedly sent an atmospheric collection aircraft to gather radioactive particles made by the explosion. 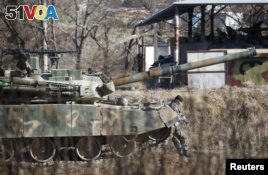 A South Korean soldier leans on a moblie artillery vehicle at a training field near the demilitarized zone separating the two Koreas in Paju, South Korea, Jan. 7, 2016. ( REUTERS/Kim Hong-Ji)

North Korea is believed to have enough plutonium to make eight to 12 nuclear weapons. Many security experts say that is more than enough to answer any supposed threat of invasion from the United States or South Korea.

The U.S.-based Institute for Science and International Security estimated that North Korea could have between 20 and 100 nuclear weapons by 2020.

The test this week followed reports of a failed North Korean submarine-launched ballistic missile test. If North Korea could develop such a missile, it would have the ability to strike anywhere in the world, including the United States.

North Korea continues to develop missiles with the ability to travel great distances. The country is believed to have 1,000 missiles that can reach targets in South Korea and Japan.

"These aren't really so much for retaliation or defense anymore," said Robert Kelly, a North Korea expert with Pusan National University. "These are kind of like society breaking weapons. If you drop a hydrogen bomb in Seoul or a couple on South Korea's big cities, you're not going to just kill a lot of people. You are also threatening the ability of North Korea to continue to function as a state."

Some lawmakers in Seoul say South Korea should develop its own nuclear weapons to answer the growing nuclear threat from the North. There have also been calls in Seoul to set up a U.S. Terminal High Altitude Area Defense (THAAD) system. China reportedly opposes deployment of the system to East Asia because of concerns it could be used to stop Chinese missiles.

Robert Kelly said he would like to see South Korea start taking THAAD more seriously. He said, "I would like to see the Americans and South Koreans and Japanese start really working seriously on regional missile defense... But you know if we don't go down that route and diplomacy doesn't seem to be working, my sense is you will see people starting to call for airstrikes."

Other observers said the United States should push for a wider economic action to punish North Korea.

Robert Manning is with the Atlantic Council. He said, "take away Kim Jong Un's credit cards. I think that would cause some real pain at a time when he has promised that his regime is going to improve the economy -- which is a long shot to start with."

U.S. and United Nations sanctions are already in place against North Korea and its leader, Kim Jong UN, for the country's earlier violations of nuclear treaties.

Barry Blechman is a national security expert with the Stimson Center. He said that, "We got the U.N. Security Council to establish tighter and tighter sanctions. We have gotten them pushed out of the international banking system. But it is still not enough so long as the Chinese continue to allow a kind of fundamental level of survival to continue there."

He added that efforts to increase pressure on North Korea would have limited results until China fully honors existing international actions against the North.

This report was based on information from VOANews. George Grow adapted this material for Learning English. Hai Do was the editor.

provocation – n. an action that makes someone angry

aircraft – n. an airplane, helicopter or other machine able to fly

retaliation – n. the action of answering an attack

couple – n. two of something

function – n. the special purpose or activity for which something exists

route – n. a path or way of getting from one point to another

credit cards – n. a card used as a method of payment

regime – n. a government; a system or planning way of doing things

sanctions – n. a threatened punishment for disobeying a rule or law