Update Required To play the media you will need to either update your browser to a recent version or update your Flash plugin.
By Dan Novak
07 June 2022

The training was held in the sea off South Korea's western coast. South Korea's Ministry of National Defense said it was an answer to North Korea's launch of eight ballistic missiles Sunday. 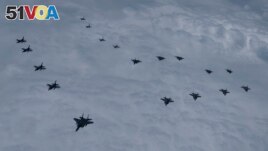 South Korea and the U.S. showed "its strong ability and willingness to strike against North Korea's provocations quickly and accurately," the South Korean military said. The two countries are watching for further actions by North Korea, it added.

North Korea on Sunday fired eight short-range ballistic missiles into the sea over a 35-minute period, South Korea's military said. It was North Korea's 18th round of missile launches this year.

On Monday, the United States and South Korea answered by launching eight missiles of their own into the ocean.

There are also signs that North Korea could soon carry out its seventh nuclear test. Another nuclear test could further raise tensions in the area.

Rafael Mariano Grossi is head of the International Atomic Energy Agency. He said Monday that one of the tunnel entrances has been opened at North Korea's nuclear test site. That may be in preparation for a nuclear test, Grossi said.

Such a test, he said "would contravene U.N. Security Council resolutions and would be a cause for serious concern."

North Korea is in the middle of one of its busiest years ever for weapons tests. It is attempting to make progress on a weapons development wish list created by leader Kim Jong Un in 2021.

Dan Novak adapted this story for VOA Learning English based on reporting by William Gallo of Voice of America.

provocation — n. an action or occurrence that causes someone to become angry or to begin to do something

contravene — n. to fail to do what is required by law