NASA Spacecraft to Study the Sun Up Close

Update Required To play the media you will need to either update your browser to a recent version or update your Flash plugin.
By Phil Dierking
09 August, 2018


The United States space agency will launch a spacecraft to explore the sun more closely than ever before on Saturday.

NASA's Parker Solar Probe will fly through the hot solar atmosphere and come within just 6 million kilometers of the sun's surface.

The spacecraft has a heat shield designed to resist temperatures of 1,370 degrees Celsius. The shield is unlike anything NASA has ever designed before. 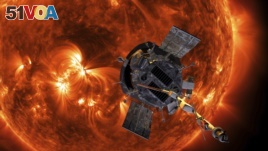 This image made available by NASA shows an artist's rendering of the Parker Solar Probe approaching the Sun.

Closer than ever before

The Parker Probe will get almost seven times closer to the sun than earlier spacecraft. To do this, it will fly past Venus seven times over seven years. Each pass will change the probe's orbit by providing a gravity boost. It will move ever closer to the sun and straight into the corona, the sun's outermost atmosphere.

By exploring the sun's corona, scientists hope to learn why it is hundreds of times hotter than the sun's surface. They will also study what drives the solar wind. Solar wind is the steady, high-speed stream of charged particles shooting off the corona into space.

Scientists expect the $1.5-billion mission to help them learn about both the Earth's sun, and also the billions of other stars in the Milky Way and beyond.

"This is where we live," said NASA solar astrophysicist Alex Young. "We have to understand and characterize this place that we're traveling through."

The project was proposed in 1958, the same year NASA was established. Now, "60 years later, and it's becoming a reality," said project manager Andy Driesman. Driesman is with Johns Hopkins University, which designed and built the spacecraft.

The technology for carrying out such a mission was not available until recently.

The Parker spacecraft has a 2.4-meter heat shield that is 11 centimeters thick. It is made of two carbon sheets, with carbon foam between them. The front has a white ceramic coating to reflect sunlight. It is expected to glow red when it experiences the extreme solar heat.

Almost everything on the spacecraft will be behind this shield, which is expected to keep its scientific instruments relatively cool.

Besides extreme temperatures, the spacecraft will also be traveling at a high speed. The probe will reach 690,000 kilometers per hour in the corona at its closest approach. That is the same as going from Chicago to Beijing in less than a minute.

The spacecraft will make its first flight past Venus in early October. Its first pass by the sun is expected in November.

The Parker Solar Probe is the first NASA spacecraft to be named after someone who is still alive. Eugene Parker is a 91-year-old professor at the University of Chicago. He predicted the existence of solar wind 60 years ago.

He plans to be at Cape Canaveral Air Force Station in the southern state of Florida to see the launch.

This story was originally written by Marcia Dunn the Associated Press. Phil Dierking adapted the story for Learning English. Mario Ritter was the editor.

approach - n. to move or become near or nearer to something or someone

boost - n. to increase the force, power, or amount of (something)

ceramic - adj. made of clay that has been heated to a very high temperature so that it becomes hard

characterize - v. to describe the character or special qualities of (someone or something)

foam - n. a soft material that is used to make many products

probe - n. a device that is used to obtain information from outer space and send it back to Earth