US Sports Teams Use High-Tech Treatments to Reduce Injuries

Update Required To play the media you will need to either update your browser to a recent version or update your Flash plugin.
By Bryan Lynn
22 May, 2019


One of the biggest struggles for professional sports teams is finding ways to keep their players from getting injured. Major injuries can greatly affect a team's overall success and profitability.

One team that has suffered many injuries in recent years is the Washington Redskins of the National Football League, or NFL. During the past two seasons, the Redskins lost more players to injury than any other NFL team.

Washington officials say they have learned that reacting to an injury after it happens is not good enough. They are now attempting to lower the risk of players getting injured in the first place.

With this goal in mind, the team's trainers are now offering players treatments that use technology-based sports medicine. 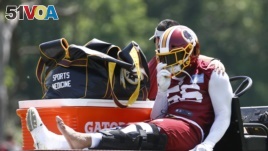 Washington Redskins linebacker Reuben Foster rides a cart off the field after suffering an injury during a practice at the team's NFL football practice facility, Monday, May 20, 2019, in Ashburn, Va. (AP Photo/Patrick Semansky)

Redskins head trainer Larry Hess showed off some of the high-tech equipment recently to a reporter who visited the team's headquarters in Ashburn, Virginia.

Hess says the treatments are aimed at strengthening the body as a whole.

Hess said an important part of the injury prevention program involves something that many people struggle with – getting enough sleep and relaxation.

Hess said he learned a lot about this idea while visiting several English Premier League football clubs. He said the clubs told him they consider quality sleep a huge part of keeping players healthy and injury free.

The Redskins decided to partner with Bedgear, a New York-based company that works with other U.S. sports teams. Bedgear sells products it describes as "performance bedding." Its specially-designed beds and pillows are made to provide strong neck and back support for better sleep. The products are also designed to moderate sleeping temperatures.

Team officials say the bedding products combined with other methods are helping the team make progress in fighting injuries. Hess noted that the Redskins were able to reduce soft-tissue injuries, such as damage to muscles, by more than 50 percent last season.

The team now operates a "recovery room" at its Ashburn training center. The room is always open and a place for players to rest up after a physical workout.

After a game, there is a three-part "restoration" process. It starts with the player spending at least 12 minutes lying down inside a large covered machine. The device uses three kinds of infrared light to help repair cells all over the body. Hess said that studies have shown it is good for helping players regain strength and recover better from intense weight room workouts.

The next step involves cryotherapy, in which the body is put inside equipment that produces extreme cold. During the treatment, a player can feel like he is having difficulty breathing because the cold tricks the body into sending blood to major organs to survive. There have been studies linking cryotherapy to improved and faster recoveries from sports injuries.

In the third part of the treatment process, a player enters a large tank filled with water mixed with 450 kilograms of salt. He floats in the water and salt mixture in complete darkness, usually with soft music playing. The experience is designed to temporarily reduce the player's sensitivity to help him reach a state of total relaxation.

Hess said the floating experience is supposed to recreate the weightless feeling of a baby still inside its mother. "It's an amazing experience," he said. He added that the feeling can be compared to floating in the Dead Sea.

"Our goal is to get them to that pre-sleep state to shut their body down," Hess said. "It will lower their heart rate. The temperature of the water replicates your body temperature. Really we're taking all sensation out."

Redskins head coach Jay Gruden says the players choose which treatments they want to use. He has spent time in the recovery room himself and liked the results.

Gruden says he believes the treatments can provide his players with yet another way to help their bodies recover and prevent injuries for years to come. "Even if it gives them a mental state of mind where, ‘Hey, I feel pretty good,' then let's give them every avenue to feel that way," he said.

The Associated Press reported this story. Bryan Lynn adapted it for VOA Learning English. George Grow was the editor.

professional – adj. related to connected to a job

advantage – n. something that will help someone succeed at something

relaxation – n. the loss of tension in the body

pillow – n. a soft support for the head of someone lying down

restoration – n. the act of repairing or bringing something back

replicate – v. do something again in exactly the same way

avenue – n. a possible way of doing something