Update Required To play the media you will need to either update your browser to a recent version or update your Flash plugin.
By Hai Do
16 April 2021


The United States is hopeful for an end to the coronavirus pandemic as it tries to prevent an "epidemic" of gun violence.

On Thursday, officials in the city of Chicago, Illinois, released video of the March 29 killing of young teenager Adam Toledo. The recording appears to show the 13-year-old boy dropping a handgun and raising his hands just before the officer fired.

The police said they had gone to the area, a mostly Hispanic neighborhood of Chicago, to answer reports of gunfire. They said the officer who shot Toledo had tried to save him. 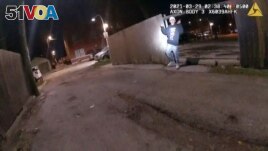 The video came out as another police officer was charged with the shooting and killing of Daunte Wright in Brooklyn Center, outside of Minneapolis, Minnesota. Wright, a 20-year-old Black man, was shot during a traffic stop. A police official said the officer mistakenly shot Wright and had meant to use a Taser against him.

Wright's death led to several days of riots in the area.

The nightly riots in the city took place as former police officer Derek Chauvin stands trial for the death of George Floyd in Minneapolis. Chauvin, who is white, was seen on video holding Floyd, who is Black, down with a knee to his neck for more than 9 minutes. During the recording, Floyd repeatedly tells the police, "I can't breathe...."

Floyd's death led to nationwide protests on policing and violence against minorities in the country.

The U.S. is also experiencing a wave of mass shootings. On Thursday, a gunman killed eight people and himself in an attack at a FedEx workplace in Indianapolis, Indiana. Several other people were wounded in the mass shooting.

Pete Buttigieg is the U.S. Secretary of Transportation and former mayor of the small Indiana city, South Bend. He posted about the incident on Twitter: "We wake up once more to news of a mass shooting, this time in Indiana. No country should accept this now-routine horror. It's long past time to act."

The FedEx shooting was the third mass shooting in the state of Indiana this year alone. And it was the latest in a series of mass shootings across the U.S. Just last month, eight people were killed in and around Atlanta, Georgia at massage businesses and 10 died in the shooting at a food store in Boulder, Colorado.

The Gun Violence Archive reports that 147 mass shootings have occurred in the U.S. so far in 2021. The independent organization defines a mass shooting as an incident in which four or more people were shot or killed. Its information is collected daily from law enforcement, government, and other reports.

What to do about gun violence?

Every mass shooting in America seems to bring more calls for gun control without success.

On April 8, President Joe Biden announced several new measures aimed at decreasing gun violence in the U.S. He called the issue "an epidemic and an international embarrassment" for the country.

The new measures include the restriction of "ghost guns," unregistered weapons that cannot be tracked. Another restricts a gun device, called a stabilizing brace, that can make handguns more deadly. And, a new rule will permit law enforcement to take possession of guns from owners who think they might do harm with the weapon.

The National Rifle Association, an organization that supports gun-ownership, moved quickly to denounce Biden's gun-control measures. The organization said, "These actions could require Americans to surrender lawful property," adding that states might use the measure to increase firearm seizures. The group said on Twitter, "It's time to STAND and FIGHT!"

The president, however, noted the limitations of his executive orders. He asked the Senate to immediately pass current bills from the House of Representatives that require tough background checks and longer waiting periods on gun purchases.

How many guns are there?

No one knows exactly how many guns are in the United States.

A 2012 report from the Congressional Research Service estimated that, as of 2009, Americans had more than 310 million guns.

The numbers are certain to be much higher now based on information from the National Instant Criminal Background Check System (NICS) maintained by the U.S. government. When a person tries to buy a gun, the law requires a background check for criminal record or other restrictions. Since 1998, more than 300 million checks have been done and only 1.5 million were denied.

The NICS reported 12.5 million background checks in the first three months of this year alone. There were nearly 40 million in 2020 and more than 172 million since 2013.

The increase of background checks followed by gun purchases came after the school shootings in Sandy Hook and Parkland. Last year, it came with the start of the pandemic and the Black Lives Matter protests following George Floyd's death.

A recent report from The Brookings Institution says Americans bought 19 million more guns in the first six months of 2020. The report says that, at this rate, "there are more guns than people in the United States." The U.S. population is estimated to be around 330 million.

Taser - n. a weapon designed to shock and impair a person's function

massage - n. the action of rubbing someone's body in a way to help relax muscles or reduce pain

embarrassment - n. the state of feeling foolish in front of others