Update Required To play the media you will need to either update your browser to a recent version or update your Flash plugin.
By VOA
04 January, 2015
51VOA听写整理，转载请注明出处。文本仅供参考，欢迎纠错！

Many teachers believe that hands-on experiences is the best way to learn. A group of students in the United States is putting that belief to the test.

The students are with the Stevens Institute of Technology, in Hoboken, New Jersey. They successfully designed and built a robot for uncovering unexploded mines at the bottom of the sea. The technology students made the robot to answer a challenge from the U.S. Department of Defense.

The underwater vehicle is called Perseus II. The students recently tested Perseus II in a 95-meter-long tank of water at the Stevens Institute of Technology. 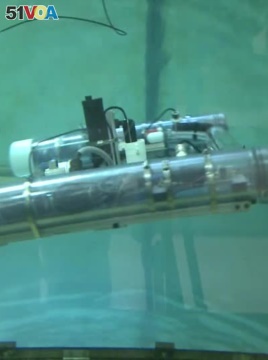 The robot costs about $15,000 to build. The students use a video game controller to direct its movements at the bottom of the tank. Devices known as thrusters enable the robot to go up, down and toward its target in the water.

Video cameras on the robot send images back to a computer through a 13-meter-long cable. Perseus II also has a set of lasers, they are used to measure the size of an object.

The robot is the creation of five undergraduate students. For over six months, they worked between 15 and 20 hours a week, to design and build Perseus II.

Michael DeLorne supervised the project. He says the specialized requirements of robot were demanding.

"Their goal was to go down and find this unexploded ordnance and not only just find them but provide information to an expert on the surface so he or she could make a decision whether it was something dangerous or not," DeLorne said.

Michael DeLorne says the students came up with some resourceful solutions for difficult problems, one such problem was how to control the position of the robot while underwater.

"One unique thing they did, they developed an algorithm that allowed them to autonomously control the vehicle's depth," DeLorne said.

Mark Siembab is a member of the Perseus II team. He says the team developed a low cost method to mark the location of whatever object they found.

"One component sank to the bottom and anchored itself while the other component had a brightly-colored orange ball which would float to the surface and provide a positive identification to the passerby or the authorities to let them know there's an object down there and we'd marked it," Siembab said.

Perseus II was successfully tested in Florida with similar robots built at other engineering schools. In a separate development, new students at the Stevens Institute of Technology have already started on the next project. It is an unmanned flying vehicle they are calling Perseus III.