US Study: Work in Space Does Not Seem to Shorten Astronauts’ Lives

Update Required To play the media you will need to either update your browser to a recent version or update your Flash plugin.
By George Grow
31 December, 2018


Astronauts traveling in space meet forms of radiation that are uncommon on Earth.

Some of this radiation has been shown to be harmful to human health. It is linked to cancers and heart problems.

Yet a new American study suggests the radiation does not shorten astronauts' lives.

Researchers studied nearly 60 years of health records and other data about male astronauts from the United States. They then compared this data to information about a group of men who are in good health, richer than most Americans and receive good healthcare: professional athletes.

The study found that neither group has higher rates of dying at a young age. In fact, both groups generally live longer than other Americans.

Astronauts are usually well-educated, earn more money and are in better physical condition than the average American. Some earlier research has linked being an astronaut to a lower risk of early death, the researchers noted.

The findings were reported in the publication Occupational & Environmental Medicine. NASA astronaut Ricky Arnold does some filming on the International Space Station Oct. 3, 3018

Much of the existing research on mortality rates in astronauts has not yet explore the mental and physical demands of this job. There also has not been a lot of research on whether astronauts show what is known as the "healthy worker effect".

This effect leads people with employment of any kind to have fewer medical problems than individuals who are unable to work, said Robert Reynolds. He was a member of the study team.

Reynolds said, "The challenge has always been to understand if astronauts are as healthy as they would be had they been otherwise comparably employed but had never gone to space at all." He added, "To do this, we needed to find a group that is comparable on several important factors."

He said there was no similar study about people who had been in space.

His comments were included in an email sent to the Reuters news agency.

The researchers compared mortality for male U.S. astronauts to active or former players from Major League Baseball (MLB) and the National Basketball Association (NBA). These men played professionally between 1960 and the middle of 2018.

Both the players and astronauts had a lower risk of dying young than the general population, the study found. And there was no difference between the death rates of NBA and MLB players.

Astronauts were more likely to die of accidents, and less likely to die from heart disease and all other natural causes, the study also found.

The results suggest that being in contact with radiation in space might not lead to an early death for astronauts because of heart problems or cancers. In fact, astronauts had a lower rate of death from heart disease than the NBA and MLB players, and had cancer death rates similar to those of the athletes. 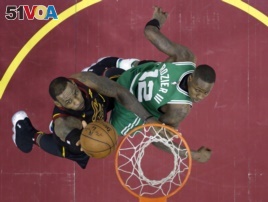 FILE - Cleveland Cavaliers' LeBron James, left, drives to the basket against Boston Celtics' Terry Rozier in the second half of Game 3 of the NBA basketball Eastern Conference finals Saturday, May 19, 2018, in Cleveland.

The study was not designed to prove whether or how space travel may directly affect human health. It also did not examine mortality rates among female astronauts or athletes.

Radiation exposure may also have been much lower during early flights to the moon, said researcher Francis Cucinotta.

Astronauts usually never smoked, leading to a lower risk of heart disease than the general population, he said. Cucinotta is with the University of Nevada, Las Vegas and was not involved in the study.

Diet and physical exercise also set astronauts and professional athletes apart from the rest of the population, said Michael Delp. He is a researcher with Florida State University in Tallahassee.

He said a job requiring physical fitness can add to the healthy worker effect.

Even for other people, Delp said, "remaining or becoming physically active and maintaining a well-balanced diet greatly improves overall health and wellbeing, and can enhance successful aging."

athlete – n. someone who plays one or more sports or who is active in physical exercise

professional – adj. related to or involving payment for one's work

mortality –n. related to the number of deaths that happen in a time, place or other condition

factor – n. a fact or influence that leads to a result

challenge – n. a test or dispute of some kind

overall – adv. in all parts; taken as a whole

enhance –v. to increase or improve