Update Required To play the media you will need to either update your browser to a recent version or update your Flash plugin.
By Bryan Lynn
07 April 2021

The two American technology companies were in a dispute over several thousand lines of computer code written by Oracle. The company said that Google had violated U.S. copyright law by copying the computer commands within one of its software products. 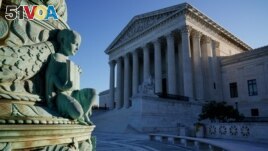 Google added the Oracle code to its own while developing the Android operating system. The code was used to create an application software interface, or API, for Android. APIs are the pieces of code that permit programs and apps to work together.

Software developers have created millions of apps for Android. The operating system now powers more than 70 percent of the world's mobile devices.

The Android system was released in 2007. To build it, Google wrote millions of lines of new computer code. But it also used about 11,500 lines of code copyrighted as part of Oracle's Java programming language. Oracle brought legal action against Google for violating its copyright and sought billions of dollars in payment.

In a 6 to 2 decision, the U.S. Supreme Court overturned a lower court's ruling that Google's use of Oracle's code in Android was a copyright violation. Instead, the court ruled that Google's copying was lawfully permitted as "fair use."

In his opinion for the court's majority, Justice Stephen Breyer wrote that Google's copying "took only what was needed" and was "transformative." This is a word the court has used to describe copying "that adds something new and important."

The legal dispute had continued in several courts for 10 years. Google won the first case when a judge rejected Oracle's copyright claim. But that ruling was overturned by an appeals court. A jury then sided with Google, but an appeals court again disagreed.

Google had argued that it did not copy a computer program, but only used elements of the Java language in the development of its Android API. It added that using code in such a way had become common in the technology industry and that the practice was good for technical progress.

Google further explained that there can be no copyright protection for the purely operational, noncreative computer code it used.

In a statement after the ruling, Oracle's executive vice president and general legal counsel, Dorian Daley, strongly disagreed with those arguments. She said Google "stole Java" and spent 10 years pressing its legal case "only as a monopolist can."

"This behavior is exactly why (governments) around the world and in the United States are examining Google's business practices," Daley added.

Google's senior vice president for global relations, Kent Walker, praised the court's ruling. "The decision gives legal certainty to the next generation of developers whose new products and services will benefit" the public, he said.

Justice Clarence Thomas gave a dissenting opinion for the court that was joined by Justice Samuel Alito. The opinion said the court should have supported Oracle's copyright. It called the ruling "anything but fair" and noted that Apple and Microsoft had not copied to create their mobile operating systems.

Thomas wrote that the decision will harm competition. He argued the ruling will make it easier for "companies to "freely copy libraries of declaring code whenever it is more convenient than writing their own." This, Thomas argues, will leave companies less willing to heavily invest as Oracle did to create "well-organized libraries" to compete with Android.

Matt Schruers is president of the Computer & Communications Industry Association. He praised the Supreme Court's ruling and said an Oracle victory would have harmed competition. He said that permitting fair use of programming elements will help technology companies create "competing, interoperable" products.

Bryan Lynn wrote this story for Learning English, based on reports from The Associated Press, Reuters and Agence France-Presse. Mario Ritter Jr. was the editor.

copyright – n. the legal right to be the only one to reproduce, publish, and sell a book, musical recording, etc., for a certain period of time

code – n. a set of rules used to instruct computers how to behave or do things

app – n. a program that runs on a computer or mobile phone that performs a special function

transformative – adj. causing a major change to something

monopoly – n. complete ownership or control of something

convenient – adj. suitable for a purpose or need

interoperable – adj. able to be used together effectively