Update Required To play the media you will need to either update your browser to a recent version or update your Flash plugin.
By Christopher Cruise
24 October, 2014


The United States Supreme Court says the southwestern state of Texas can keep in place a new voting law. The law says voters must show identification documents before they are permitted to mark ballots. A lower court had ruled that the law could keep minorities from voting.

The court released the ruling early Saturday. It was not signed by any of the nine justices. No reason was given for the ruling. The Supreme Court usually tells why it ruled. But in some cases it releases a ruling without an explanation.

The law was approved in 2011. It requires voters to show an identification document with their picture on it before they can vote. 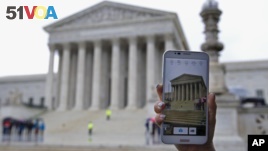 The U.S. Supreme Court in Washington.

Officials in Texas say the goal of the legislation is to stop illegal voting. They said they strongly support the Supreme Court's ruling on Saturday.

Three of the justices did not agree with the ruling. One of them -- Ruth Bader Ginsburg -- wrote a six-page document, called a dissent. She said the ruling may keep as many as 600,000 people from voting although they have registered to do so. State officials say they do not agree with Justice Ginsburg.

Justice Ginsburg said a higher percentage of voters who are kept from marking ballots are black or Hispanic than are white. She said racial discrimination still takes place in Texas elections.

She said many people who live in rural Texas face travel times of three hours or more to go to a government agency to get the required documents.

In recent weeks, the Supreme Court has released four rulings on election laws. States have asked the court to decide if election law changes approved by Republican-controlled state legislatures can be put in place during next month's local and congressional elections.

The court approved election law changes in North Carolina and Ohio, but blocked changes in Wisconsin. The justices did not say why they approved the laws in any of those rulings.

This story was reported by VOA correspondent Lou Lorscheider in Washington. Christopher Cruise wrote it for Learning English. He also narrated and produced the program. Mario Ritter edited the story.

identification – n. something that shows who a person is; a document or card that has a person's name and other information about that person and that often includes their photograph

ballot – n. a piece of paper used to vote in an election

ruling – n. an official decision made by a judge

explanation – n. the act or process of making something clear or easy to understand

dissent – n. a statement by a judge giving reasons why the judge does not agree with the decision made by the other judges in a court case

rural – adj. of or relating to the country and the people who live there instead of the city