US Court: Offensive Trademarks Are Protected by Free Speech

Update Required To play the media you will need to either update your browser to a recent version or update your Flash plugin.
By Christopher Jones-Cruise
20 June, 2017


The United States Supreme Court ruled Monday that an Asian-American musical group called "The Slants" has the right to trademark its name. The word is offensive to many Asians.

The group's founder, Simon Tam, tried to trademark the name in 2011. But the U.S. Patent and Trademark Office denied the request. It said the word was a derogatory reference to Asian peoples' eyes.

But on Monday, the Supreme Court said a federal law that bans offensive trademarks violates free speech rights guaranteed by the First Amendment of the Constitution. 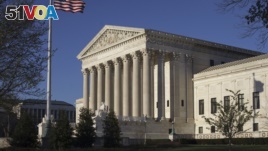 Tam was happy about the ruling. He said: "This journey has always been much bigger than our band -- it's been about the rights of all marginalized communities to determine what's best for ourselves."

The ruling could affect other trademark cases. In 2014, the trademark for the Washington Redskins football team was cancelled after Native Americans complained that the word "redskins" was offensive. A lower court said it would wait to hear an appeal of the decision until the Supreme Court ruled on the musical group's appeal.

VOA News Writer Smita Nordwall wrote this story. Christopher Jones-Cruise adapted her report into Learning English. We also used reporting by the Associated Press. Hai Do was the editor.

trademark – n. something (such as a word) that identifies a particular company's product and cannot be used by another company without permission

offensive – adj. causing someone to feel hurt, angry or upset; rude or insulting

marginalize – v. to put or keep (someone) in a powerless or unimportant position within a society or group