US to Admit More Afghan Refugees as Taliban Violence Increases

Update Required To play the media you will need to either update your browser to a recent version or update your Flash plugin.
By Bryan Lynn
02 August 2021


The United States is expanding efforts to permit Afghan citizens who have worked with the U.S. to resettle as refugees in America.

The U.S. State Department announced Monday it was widening a refugee program. The move is expected to offer permanent U.S. refugee status to "many thousands of Afghans and their immediate family members."

The State Department said "the U.S. objective remains a peaceful, secure Afghanistan." However, it added that the refugee program was being expanded "in light of increased levels of Taliban violence" in the country.

The expansion aims to help Afghans who might be targeted by Taliban militants because of their work with U.S.-based organizations during the 20-year war in Afghanistan.

The announcement came as Taliban violence has increased ahead of a planned withdrawal of U.S. military forces from the country by the end of this month. 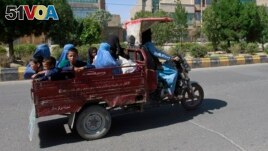 The State Department said it had created a new "Priority Two" category to accept more Afghan refugees within its U.S. Refugee Admissions Program.

The change extends refugee status to current and former employees of U.S.-based aid and development agencies. Other assistance groups receiving U.S. financing are also included. In addition, Afghan citizens working for U.S.-based news organizations are included in the program.

The expansion will also cover current and former employees of the U.S. government and NATO military operations who do not meet requirements for existing refugee programs.

The new category is meant for Afghans who are not able to get a Special Immigrant Visa, SIV, because they did not work directly for the U.S. government or did not hold their government jobs long enough.

To qualify, Afghans must be nominated by a U.S. government agency or by the highest U.S. citizen employee of a U.S-based media company or nongovernmental organization.

The first group of approved SIV holders -- most of whom served as translators or did other work for U.S. troops or diplomats -- arrived in the U.S. last Friday. That group of 221 people is among 2,500 who will be brought to the U.S. in the coming days.

Another 4,000 SIV holders have not yet received full approval. They are expected to be resettled with their families to third countries ahead of the completion of the U.S. withdrawal. About 20,000 Afghans have expressed interest in that program.

category – n. a group of people or things that are similar in nature

objective – n. something that you are trying to achieve

qualify – v. to be permitted to do or have something

translator – n. a person who changes words in one language into another