US to Change Police Methods after Murder Decision

Update Required To play the media you will need to either update your browser to a recent version or update your Flash plugin.
By Hai Do
21 April 2021


The U.S. Department of Justice announced an investigation into the policing methods of the Minneapolis police department Wednesday.

The action came one day after former police officer Derek Chauvin was found guilty of George Floyd's murder in a trial in the city.

The move is the first major investigation called for by U.S. Attorney General Merrick Garland. He said the investigation would try to find out whether the Minneapolis police department, or MPD, "engages in a pattern or practice of unconstitutional or unlawful policing." 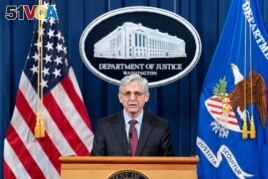 Attorney General Merrick Garland speaks about a jury's verdict in the case against former Minneapolis Police Officer Derek Chauvin in the death of George Floyd, at the Department of Justice, in Washington, D.C., U.S. April 21, 2021. (Andrew Harnik/Pool via Reuters)

Garland said the investigation will look into the department's use of force, including force against protestors. It will also study police treatment of those with behavioral health problems.

Garland said, "The Justice Department has already begun to reach out to community groups and members of the public to learn about their experiences with the MPD." Federal investigators, he added, will also talk to officers about training and the support they receive.

Former officer Derek Chauvin was found guilty of murder Tuesday in the death of George Floyd. Chauvin had pressed his knee on Floyd's neck for nearly 10 minutes. Floyd's death led to nationwide protests against racism and policing practices in the United States and other countries.

President Joe Biden called the verdict "a giant step forward in the march toward justice in America." But he also said the jury's decision was "much too rare."

Biden said several things came together in this case, including the video, the witnesses and police official statements in court, for the jury to reach the murder verdict.

"It feels like it took all of that for the judicial system to deliver a just, basic accountability, " Biden said.

Vice President Kamala Harris joined Biden Tuesday. She called on the Senate to pass a federal policing bill that has already been passed by the House.

The bill is named George Floyd Justice in Policing Act. It calls for bans on chokeholds, a police method of restraining a suspect by the neck. It also would ban raids called no-knock warrants in which police do not announce their presence.

Last March, a Black woman, Breonna Taylor, was shot and killed by police who entered the wrong house using a no-knock warrant. The bill also requires police officers to stop others from using too much force and create a national list of police wrongdoing.

The bill seeks to end "qualified immunity", a legal idea that restricts charging police officers for incidents that take place on the job. Many Republican senators opposed this part of the bill in the Senate. Democrats and Republicans have an equal support in the Senate. The Republicans argued that such changes would harm officers acting in good faith.

Tim Scott is a Republican senator from the state of South Carolina. He told reporters that he would introduce a related proposal in the coming weeks. Scott wanted to put more responsibility in police departments than individuals when a police officer is accused of wrongdoing.

The outcry from the video of Floyd repeatedly saying, "I can't breathe..." has led to changes in public opinion about police methods. It also led to new laws in several cities and states.

In an opinion study after Floyd's death last May, the Gallup organization reported that a majority of Americans, 58 percent, said major changes are needed to make policing better. Another 36 percent say small changes are needed.

Preventing excessive use of force and holding police officers responsible for wrongdoing were among the ideas receiving public support.

Ballotpedia is an independent organization that informs the public of political issues and elections around the U.S. The organization says that 100 cities and states have made changes to policing policy as a result of Floyd's death. Many states, from California to Connecticut, passed laws to ban chokeholds.

The National Conference of State Legislatures reported there are 471 bills being considered in 47 state legislatures to deal with the issues of policing and use of force.

In his speech, Biden recalled his talk with George Floyd's daughter, Gianna. He said she told him last year that "Daddy changed the world." After the verdict, Biden called Floyd's family and he told Gianna that "Daddy did change the world."

Hai Do wrote this report for VOA Learning English. Mario Ritter, Jr. was the editor.

pattern –n. a repeated or regular way in which something happens or is done

practice –n. something that is done often or regularly

verdict –n. the decision of a jury in a trial