Update Required To play the media you will need to either update your browser to a recent version or update your Flash plugin.
By VOA
13 November, 2013

Haiti is among the poorest nations in the world, only about half the children in the country go to primary school. And the United Nations children's agency UNICEF says, fewer than 25 percent attend secondary school.

Many Haitian schools are in poor condition. They lack running water and dependable electricity. The United States Institute of Peace has called the education system in Haiti "dysfunctional", it says reforms and financial assistance are badly needed.

Last week, U.S. Education Secretary, Arne Duncan visited Haiti to discuss its education system. He met with Haitian President Michel Martelly. Mr Martelly was elected in 2011, he is working on his campaign promise to make education required and free of charge for every child. 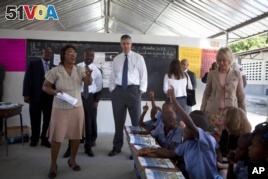 U.S. Secretary of Education Arne Duncan, center, stands in a classroom during his visit to the National School in Tabarre, Haiti, Nov. 5, 2013.

Mr Duncan announced that the U.S. Agency for International Development(USAID) will invest millions of dollars to improve Haiti's education system. The agency will invest the money through its Room to Learn program, a program seeks to increase equality in opportunities for education. Mr Duncan said the United States will also provide technical assistance to Haiti's Education Ministry.

The American Education Secretary spoke with VOA's Creole Service after he returned to the U.S.

He said Haitian lawmakers are considering legislation that would expand funding for education. He said that if the measure passes, the law would be hugely important. Mr Duncan talked about his visits to several schools in Haiti, these included a school for children who live on the street. Mr Duncan praised the students for their courage and their efforts to gain a better life.

"To hear their stories of why they are working so hard, and why they want to get off the streets - I'll never forget it," said Duncan.

Mr Duncan noted that many children lost parents in the 2010 earthquake. Another school he visited had 110 students in a single classroom. He also said it is very rare for Haitian school to have computers.

However, he said most students are able to get a meal at school. For many, that is their only meal of the day.

In his interview with the Creole Service, Mr Duncan also talked about language use in Haitian schools. The country has two official languages - Creole and French. Most Haitians speak Creole but most schools use French. Mr Duncan said he believes this situation is difficult for children who learn Creole at home.

"And I think that for other challenges students are facing, when their teacher speaking a different language from use, that can be pretty hard," said Duncan.

He praised an experimental program that teaches reading in Creole in about 300 schools. Mr Duncan also noted the importance of having good data to help schools. He said there is a need for collecting more basic information like the number of schools, the number of teachers and how the student are progressing.