US to Leave Bagram Airfield after 20 Years

Update Required To play the media you will need to either update your browser to a recent version or update your Flash plugin.
By Jonathan Evans
30 June 2021


For nearly 20 years, Bagram Airfield was the center of American military power in Afghanistan.

The base is located behind fences and protective walls just an hour's drive north of the Afghan capital, Kabul. At first, Bagram was a symbol of the campaign to seek those responsible for attacks on the United States on September 11, 2001. Then, the base became a symbol of its struggle for a way through the resulting war with the Taliban militant group.

Andrew Watkins is a senior expert on Afghanistan for the International Crisis Group in Brussels, Belgium. He said, "Bagram grew into such a massive military installation that, as with few other bases in Afghanistan and even Iraq, it came to symbolize and epitomize the phrase ‘mission creep'." Mission creep is a term that means the slow change over time of the goals of a military campaign.

American officials said last week that more than 50 percent of U.S. forces in Bagram have moved out. The rest will most likely be gone by July 4. The Afghan military will then take over Bagram as part of its continuing fight against the Taliban.

The U.S. withdrawal marks the second time a world power has come and gone from Bagram. 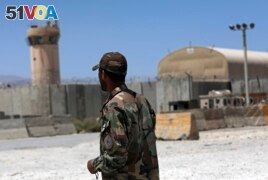 An Afghan Army soldier stand guard at the gate of Bagram Air Base in Afghanistan, Friday, June 25, 2021. (AP Photo/Rahmat Gul)

The former Soviet Union built the airfield in the 1950s. The Soviets invaded Afghanistan in 1979 to support a communist government. Bagram became their main base from which it would defend its occupation of Afghanistan. For 10 years, the Soviets fought the mujahadeen - Afghan fighters supported by the U.S.

The Soviet Union negotiated its withdrawal in 1989. Three years later, the pro-Soviet government collapsed, and the mujahedeen took power. However, the mujahedeen soon began to fight among themselves and kill thousands of civilians. That conflict brought to power the Taliban who captured Kabul in 1996.

When the U.S. and NATO took control of Bagram in 2001, they found it in ruins. Rocket- and- gunfire from battles between the Taliban and rival Afghan fighters had severely damaged the buildings. Most of the fencing around the base was destroyed.

After moving the Taliban from Kabul, the U.S.-led coalition began working with their allies to rebuild Bagram. The base quickly grew to a size of about 78 square kilometers.

Bill Roggio is a senior expert on Afghanistan at the Foundation for the Defense of Democracies, a research group.

He said, "The closure of Bagram is a major symbolic and strategic victory for the Taliban."

Roggio added, "If the Taliban is able to take control of the base, it will serve as anti-U.S. propaganda fodder for years to come."

For Afghans in the Bagram area, the base has been a major supplier of employment. The U.S. withdrawal affects nearly every household, said Darwaish Raufi, the Bagram area governor.

The Americans have also been giving the Afghan military some weapons and other material. Anything else that they are not taking, they are destroying and selling to parts dealers around Bagram. U.S. officials say they must make sure nothing usable can ever fall into Taliban hands.

Last week, the U.S. said it had thrown out 14,790 pieces of equipment and sent 763 C-17 aircraft loaded with material out of Afghanistan. Raufi said many villagers have complained to him about the U.S. leaving just their waste behind.

Michael Kugelman is deputy director of the Asia Program at the Wilson Center, a policy research group in Washington, D.C.

He said, "There's something sadly symbolic about how the U.S. has gone about leaving Bagram. The decision to take so much away and destroy so much of what is left speaks to the U.S. urgency to get out quickly."

Some have compared the U.S. withdrawal to that of the former Soviet Union.

Retired Afghan General Saifullah Safi worked alongside U.S. forces at Bagram. He said the Soviets left all their equipment when they withdrew. He added that they "didn't take much with them, just the vehicles they needed to transport their soldiers back to Russia."

symbol - n. an action, object, event, etc., that expresses or represents a particular idea or quality

fodder - n. material that is used for a particular purpose

installation - n. something such as a piece of equipment that is put together and made ready for use

epitomize - v. to be a perfect example or representation of something; to be the epitome of something