US to Share its AstraZeneca Vaccine Supply with the World

Update Required To play the media you will need to either update your browser to a recent version or update your Flash plugin.
By Bryan Lynn
27 April 2021


The United States says it will share its entire supply of the AstraZeneca COVID-19 vaccine with other nations.

A White House statement said up to 60 million doses of the vaccine are expected to be available for export in the coming months.

The AstraZeneca vaccine is widely used around the world. But it has not received emergency approval from the U.S. Food and Drug Administration (FDA). U.S. officials say they are reviewing the safety of the AstraZeneca supply before shipping doses out in the next several weeks.

About 10 million AstraZeneca doses have been produced in the U.S. About 50 million more are still in the production process and could be available to ship in coming months. The doses will be donated by the U.S. government, which has contracted with the company for a total of 300 million doses. 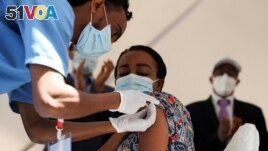 A woman receives the AstraZeneca/Oxford vaccine under the COVAX program against COVID-19 at the Eka Kotebe General Hospital in Addis Ababa, Ethiopia March 13, 2021. REUTERS/Tiksa Negeri

Jeff Zients leads COVID-19 efforts for President Joe Biden. He said the U.S. feels assured that its supply of FDA-approved vaccines -- from Pfizer, Moderna and Johnson & Johnson – will be enough to meet U.S. needs in coming months. Last week, the U.S. restarted use of Johnson and Johnson shots after a brief break while health officials investigated possible safety risks.

"The U.S. is looking at options to share the AstraZeneca doses with other countries as they become available," Zients said.

U.S. officials say more than 53 percent of the U.S. adult population has now been vaccinated with at least one dose of its three approved vaccines. The U.S. estimates it will have enough supply of those vaccines for its total population by early summer.

Last month, the Biden administration announced it would share about 4 million AstraZeneca doses with Mexico and Canada. But the U.S. administration has faced growing pressure to share more of its vaccine supply with the world. Some countries, especially India, have recently seen an explosive rise in COVID-19 cases and are struggling to get needed vaccine supplies.

The U.S. has yet to finalize where the AstraZeneca doses will go, Zients said. Mexico and Canada have asked the U.S. to share more doses and many other countries are seeking supplies as well. "We're in the planning process at this point in time," White House press secretary Jen Psaki told reporters.

Two government officials in India told Reuters the country expects to secure the biggest part of the 60 million AstraZeneca doses the U.S. plans to share.

"The wheels of diplomacy and appeals from (the World Health Organization) and top public health experts changed their thinking and now we have the U.S. ready to send vaccines," one official said.

A second official said Indian Prime Minister Narendra Modi had been assured that India will be given "priority" in the vaccine sharing program. The officials did not want to be named because talks between the U.S. and India are ongoing.

India, which has the world's largest vaccine-making capacity, had donated or exported more than 66 million doses before its own needs jumped because of a sharp rise in infections. Over the last six days, India has reported more than 300,000 cases a day. The situation has pushed the country's public health system close to collapse in some areas.

One of the officials told Reuters: "We are not sure how many (doses) we will receive. All I can say here is, our bowl is the largest and deepest."

The Associated Press and Reuters reported this story. Bryan Lynn adapted the reports for Learning English. Hai Do was the editor.

option – n. one thing that can be chosen from a set of possibilities

capacity – n. the total amount of something that can be contained or produced

bowl – n. a round container that has tall, curving sides and that is used for preparing or serving foods and liquids