US to Streamline Application Process for Afghan Special Immigrant Visas

Update Required To play the media you will need to either update your browser to a recent version or update your Flash plugin.
By Gregory Stachel
20 July 2022


U.S. officials this week announced a change to the Special Immigrant Visa, or SIV process for Afghans.

Top officials told reporters that visa seekers, or applicants, will only need to complete one form. The change means that applicants can go through a single government agency.

Beginning July 20, new applicants will no longer need to send a separate form to U.S. Citizenship and Immigration Services, or USCIS. The complete process is now overseen by the State Department. 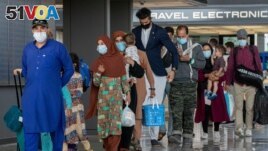 FILE - Families evacuated from Kabul, Afghanistan, walk through the airport to board a bus after they arrived at Washington Dulles International Airport, in Chantilly, Virginia on August 31, 2021. (AP Photo/Gemunu Amarasinghe/File Photo)

Antony Blinken is Secretary of State and Alejandro Mayorkas is Department of Homeland Security Secretary for the United States. They said in a joint statement that the new "streamlined" process is part of their continued efforts to make the program easier. They said the change will help remove barriers for applicants as well as reduce waiting times.

After nearly 20 years of war, the U.S. and its allies left Afghanistan last August. They helped evacuate more than 130,000 Afghans in their final weeks in Kabul, the capital.

Many of those Afghans hoped for a life in the U.S. The 10-year-old SIV program helps people who worked with the United States government move to the U.S. The SIV program is a direct way for people to receive a permanent resident card, or green card, to live in the U.S.

In a call with reporters, officials with the administration of U.S. President Joe Biden said the changes will reduce processing times by "about a month." A top government official said that it will be "a lot easier" for applicants as well as for the U.S. government.

Biden officials said there are 74,274 applicants in the SIV program process. Of those, 10,096 have already passed an important step called the chief of mission approval. A top government official said they estimate 45,000 to 50,000 SIV recipients, including family members, have passed that step.

SIV applicants usually move through a lengthy 14-step application process. The full process, including decision-making and approval, takes an average of three years. The applicant must receive the visa before entering the United States.

Biden officials said all new Afghan SIV applicants will no longer need to send in a separate 19-page form to USCIS. That includes most applicants who have already started the process. But the officials added that the "bottom line" is the United States will still need all necessary and required information to process someone's SIV application.

Several U.S. agencies were involved in deciding what kind of information an applicant needs to send in the new single form.

A top official told reporters, "There were a lot of redundancies in the previous process." The official said those redundancies, or repeated steps, will be removed in the new process.