Update Required To play the media you will need to either update your browser to a recent version or update your Flash plugin.
By Mario Ritter
29 August, 2018

Such a move could hurt the competitiveness of Chinese industries.

Scott Kennedy is the Deputy Director of the Freeman Chair in China Studies at the Center for Strategic & International Studies based in Washington. He said China may be forced to change its industrial policies to deal with a developing situation. 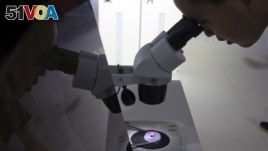 A visitor to the 21st China Beijing International High-tech Expo looks at a computer chip through the microscope displayed by the state-controlled Tsinghua Unigroup project which has emerged as a national champion for Beijing's semiconductor ambitions in Beijing, China, Thursday, May 17, 2018.

"It will put a lot of pressure on China to increase domestic consumption and domestic investments to replace the loss of opportunities with the United States and that could put pressure on (Chinese President) Xi Jinping," he said.

The U.S. has placed heavy duties on a number of Chinese products. Experts say that the taxes on Chinese exports have affected China's investment in fixed assets such as big roads or railway projects and factories. Chinese investment in such projects grew six percent in the first half of the year. However, that is down from earlier periods.

U.S. may block the flow of some technologies

The administration of U.S. President Donald Trump has said it wants to stop the unfair movement of U.S. technology to China. It points to the large trade deficit the U.S. has with China, which reached about $375 billion in 2017.

Observers suggest that U.S. efforts to limit technology going to China are in response to the "Made in China 2025" development plan. That plan sets high goals for China to be competitive in fields such as electric cars, robots and other important technologies.

Earlier U.S. administrations have shown concern over so-called "dual-use" technologies. These are technologies that have both civilian and military uses.

The Trump administration has shown it is willing to limit other technologies as well.

Kennedy said the U.S. may be trying to limit the Chinese development plan and also to "move supply chains out of China."

China is concerned about its supply of semi-conductor technology from U.S.-based companies Intel and Qualcomm. China's huge electronics industry depends on U.S. semiconductors.

Lourdes Casanova is director of the Emerging Markets Institute at Cornell University's S.C. Johnson Graduate School of Management in New York. She notes that, "China still buys a lot of semi-conductors from [the] U.S."

However, she added, "China is investing a lot of money to make its own semi-conductors and be less dependent on Intel."

China's traditional strength in manufacturing has been its low cost of labor. However, new technologies are replacing some labor-intensive jobs. Technologies that are doing this include artificial intelligence, robotics, three dimensional printing and highly connected devices known as the "internet of things."

China has made technology a main part of its long-term development plans.

However, some commentators in China say technology could continue to be a point of disagreement with the West. They even suggest that the U.S. and Europe may seek to cut off China from these areas.

Saibal Dasgupta reported this story for VOA News. Mario Ritter adapted it for VOA Learning English. Hai Do was the editor.

domestic –adj. made in your own country

duties –n. taxes on goods being brought into a country