Update Required To play the media you will need to either update your browser to a recent version or update your Flash plugin.
By VOA
01 November, 2015

The training began October 19 in Agadez, the largest city in central Niger.

More training will follow for armies in Cameroon, Nigeria and Chad, a U.S. military official told the VOA. 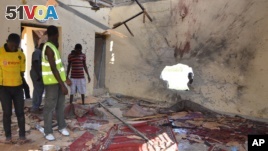 People inspect a damaged mosque following an explosion in Maiduguri, Nigeria, Oct. 23, 2015. Boko Haram is suspected to be behind bombing.

News of the U.S. training mission that targets Boko Haram comes after some rare good news in the fight against the militant group.

The Sambisa Forest is a place where Boko Haram is active.

The rescued captives include 192 children and 138 women, the Nigerian military said. None of those rescued included any of the 276 school girls taken from a Nigerian boarding school last year.

Boko Haram is an Islamic militant group operating primarily in northeastern Nigeria. It is also active in Chad, Niger and northern Cameroon.

Plans call for the training of about 150 Niger troops. Training details were not reported.

But U.S. officials said training will include basic soldier skills, as well as teaching small-arms shooting.

What do you think about U.S. helping to train troops against Boko Haram? Leave us a comment or post your thoughts on 51VOA.COM.

militants – n. having or showing a desire or willingness to use strong, extreme, and sometimes forceful methods to achieve something

personnel – n. the people who work for a particular company or organization

stability – n. the quality or state of being stable

benefit – v. a good or helpful result or effect

captive – n. captured and kept in a prison, cage, etc.

We want to hear from you. Write to us in the Comments Section on 51VOA.COM.