Update Required To play the media you will need to either update your browser to a recent version or update your Flash plugin.
By Bryan Lynn
15 December 2021

Virtual reality involves the creation of digital environments that can be entered and controlled by humans. People use a headset that permits them to see virtual settings and objects, along with electronic controllers, to experience VR environments. 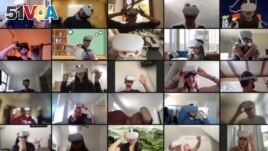 The new class, or course, is called "Virtual People." It is taught by Jeremy Bailenson, a professor of communication.

Bailenson came up with the idea after teaching students about VR for nearly 20 years. During that time, he saw the technology continue to develop and decided the best way to demonstrate its abilities was to create a full course experience with VR.

The class covers the expanding influence of VR in many different fields, "including popular culture, engineering, behavioral science and communication," the official course description reads.

Each week the course centers on different areas where VR can be used in the real world. The course includes times when students have individual VR experiences, as well as times when the whole class enters a VR environment at the same time.

"In Virtual People, the students don't just get to try VR a handful of times. VR becomes the medium they rely on," professor Bailenson said in a statement. He added: "To the best of my knowledge, nobody has networked hundreds of students (with) VR headsets for months at a time in the history of virtual reality, or even in the history of teaching."

Each student received an Oculus Quest 2 headset to use throughout the course. Facebook's parent company Meta created the Quest device. Meta has said such headsets will play a big part in a future "metaverse" it plans to build with other companies.

The university says that during 2021, two courses permitted 263 students to spend nearly 3,500 shared hours together in VR environments. The course description says students can virtually take field trips, hold group discussions and even take part in live music events and other performances.

In addition to the headsets, the course also needed software to connect the students and teachers. For this, Bailenson said the university decided to use the ENGAGE virtual communication system. ENGAGE is used by major companies and educational organizations to hold virtual meetings and events.

Cyan DeVeaux is a doctoral student at Stanford who serves as a teaching assistant for the class. She told The Stanford Daily that VR permits people to "imagine the impossible."

Among class exercises was "a guided meditation in outer space," DeVeaux said. Students were also able to create performances with different avatars and build unusual settings on their own.

Allison Lettiere took the class before graduating in the field of computer science. She said that in the past, she mostly thought of VR as being linked to video games. But she said the course taught her valuable information about the technology that she might be able to use in her career.

Lettiere said one exercise was particularly helpful. It permitted students to virtually walk in someone else's shoes. She said this could help her better understand the needs some people have with accessibility in technology.

Sophie Marie Wallace is a student majoring in science, technology and society. She said the class helped her connect to virtual experiences that led her to discover a new area of interest, "...using VR to improve sports performance in both land and (water) sports."

The course is part of a study being carried out by Stanford's Virtual Human Interaction Lab. The study is looking at how virtual technologies can be effectively used in educational settings. Bailenson and DeVeaux plan to use data from the class to examine differences in behavior in virtual environments. They hope the data can be used to help understand these differences and lead to an expansion of VR technologies in education.

Bryan Lynn wrote this story for VOA Learning English, based on reports from Stanford and The Stanford Daily. Mario Ritter, Jr. was the editor.

medium – n. a way of communicating or expressing something

rely – v. to trust someone or something

meditation – n. the act or process of spending time in quiet thought

avatar – n. an electronic image people create to represent themselves in a computer game or on the internet

accessible – adj. easily used or accessed by people with disabilities