Update Required To play the media you will need to either update your browser to a recent version or update your Flash plugin.
By George Grow
09 May 2020


Classes held in tents; college officials choosing your roommate based on coronavirus tests; schools setting aside special housing for students known to have the novel coronavirus.

In the United States, college life could look very different four months from now when students return for classes.

Many colleges told students to return home and moved classes online in March as the virus spread.

Now, universities are exploring new ways to make sure students can return to campus for the 2020-2021 school year.

"There will be changes for sure, but one way or another we are going to be open," said James Herbert. He is president of the University of New England or UNE, a private college in Maine.

The selling point of many colleges is campus life and the sense of community it builds, said Brian Rosenberg, president of Macalester College in Minnesota.

When classes are online, private schools cannot make money from housing and meal plans, and they struggle to explain tuition costs, Rosenberg said.

James Herbert said UNE is thinking about basing roommates on the results of tests that can show if someone has antibodies to the coronavirus.

The idea is: a student without antibodies would share a room with one who has them to prevent roommates from infecting each other, Herbert said.

He added the plan is a "work in progress" and depends on the quality of tests and ongoing research.

"If the science improves, and the availability improves over the coming months, it could be a really useful tool."

David Greene, president of Colby College in Maine, says he expected some student housing would be set aside for infected students.

UNE is thinking about renting rooms at a hotel near campus to space students out, Herbert added. 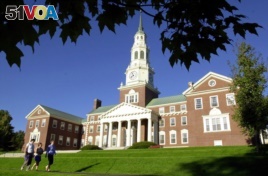 What to do about class size?

Colleges could suspend classes where hundreds of students fill auditoriums to hear their professor. Those large rooms could be used for smaller classes, where students can sit further apart, Rosenberg said.

Brown University in Rhode Island may require students and teachers to wear face masks, Brown's president Christina Paxson wrote in The New York Times. She added that the school may set limits for sporting events, music shows and parties.

Even with safety measures, colleges cannot end the risk of disease and should be open about it, Herbert said.

The University of New England may send "consent forms" to students and their parents. Such forms would make clear they are "assuming a somewhat higher risk" by returning to campus, Herbert said.

Questions also remain about whether students at colleges known for partying and sports will follow social distancing and other safety measures.

"I expect there will be at least some groups of people that wouldn't listen and have normal social gatherings, but I think overall most people will be respectful," said Madeleine Larsen. She is in her second year as a student at the University of California, Los Angeles or UCLA.

The 20-year-old added she was still undecided about returning to UCLA and might take a year off if classes in September are online. Larsen said she will likely return to the school if there are in-person classes even if it means accepting major changes to college life.

"There's no way things can go back to the way they were before — that's just not realistic at this point," she said.

tent – n. a temporary shelter made of cloth

campus – n. the grounds and buildings of a college or university

tuition – n. the money owed for teaching by a school

rent – v. paying someone for the use of property or land

consent – n. permission to something to happen